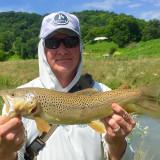 By FishnDave,
Wednesday at 02:05 PM in General Flyfishing Topics