I'm Not sure of where the Broodstock walleye are collected now, but a few years ago, and for several on consecutive years, they were all collected below Truman Dam, which are lake of the Ozarks fish t 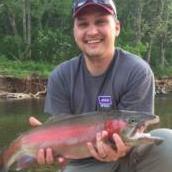 The growth rates from the Grenada study are measured directly from the fish from Grenada. The colored maps are USDA hardiness zone maps. They are really in effect just a comparison of the average mini

I'm not sure who you got that information from, but I was highly involved with sampling and collection of walleye broodstock in the 80s. We never determined that shocking had any negative effect on sp