Sign in to follow this
Followers 0
Bull Shoals is the last lake in the White River chain of lakes, located in southwest Missouri and north Arkansas. It’s known for its sprawling, clear waters, shear bluff banks and lack of development along its shores. Walleye and now stripers are the species most anglers go after, but its smallmouth and largemouth bass, as well as whites and crappie are in abundance, too. The lake holds several state record fish including walleye, striper and yellow perch.

39 articles in this category 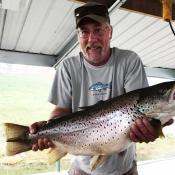