Have been too busy traveling with work and clearing the decks of honey dos at home to get to the lake lately - finally made a day of it Friday and dodged lightening bolts Saturday looking for fish.  Had a friend who is a lifelong Mark Twain fisherman on board and he was stunned at the quality of crappie in LOZ.  Friday AM we started looking shallow for bass and crappie but caught nothing but bucks and quickly decided to move out and try and pick up staging crappie in deeper water - we caught our 15 each dragging clown colored cranks at 18-24 ft in 30-60 FOW.  While the action was not fast and furious most of these fish were 12-14” and we only caught 1 crappie less than 10” with lots of 14-17” largemouth mixed in.  We cleaned the crappie and went back out looking for walleye and stripers; blanked on the walleye but caught a handful of big whites and 3 hybrids spooning with the largest pushing 10#.

Saturday we tried walleye early with no luck but caught some nice largemouth instead on Keitechs before round one of storms pushed us under cover.  When those laid down we went out again in the afternoon looking for crappie and in an hour had 18 before round two of storms rolled in - size was not as good as Friday with no fish over 13 but the action was better.  There was a break in the storms again and we tried to get out but rounded the corner to black skies and had to reconsider but despite limited time fishing Saturday it was great to get on the water again.

Boat traffic was pretty heavy Saturday with some real knuckleheads out there with absolutely no spatial awareness.  I was saddened to hear about the kids Friday night and I can’t do anything but SMH when I see some of these folks behind the wheel of a watercraft on a lake with that much traffic - as time passes I become more a proponent of a REAL operators certification requirement.  Although I did see 5-O working the Osage/Gravois confluence at dusk handing out speeding tickets, they can’t fix stupid... 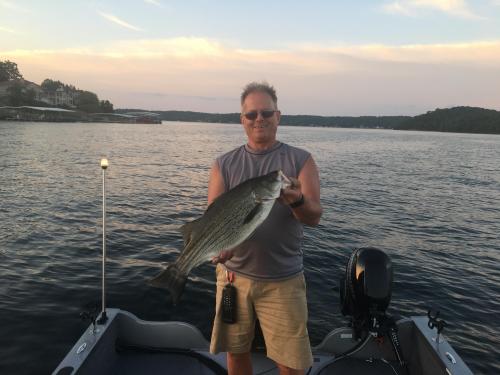