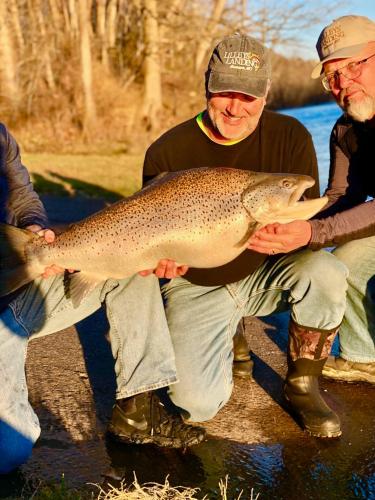 Because there are so many facets to this Lake Taneycomo trout story, it's hard to know where to begin.  The prime fact is that Paul Crews of Neosho, MO, landed the biggest brown trout Saturday anyone's ever caught in the state of Missouri to date.  It was officially weighed by Missouri Department of Conservation Fisheries Biologist Shane Bush and documented at  34 pounds and 10 ounces.  That beat the previous state record by a little more than six  pounds, caught by Scott Sandusky of Arnold, MO,  in November, 2009, also on Lake Taneycomo.

Crews and partner, Jimmy Rayfield of  Salem, MO, were fishing together in a trout tournament hosted by Lilleys' Landing Resort & Marina on upper Lake Taneycomo.  It's called the Vince Elfrink Memorial, named after Vince who was an avid sportsman, husband, father, and friend to many of the participants of the contest, including Crews and Rayfield.  Vince passed away in 2011 of brain cancer at the age of 52.  And just so happens that the pair won last year's tournament, sealed by a 21-inch brown trout Rayfield had caught.  The pair beat out 36 other teams to win this year's event.

The day started out foggy and wet, but the afternoon brought out the sun and wind.  We all were watching for thunderstorms early but anticipating the high winds forecast for later in the day, and they did arrive about 2 p.m..  Fishing in wind gusts up to 40 m.p.h. is not easy, especially tossing a small 1/8th ounce, sculpin-colored jig around.  Working a lure that small in high winds is tough, even with four-pound line, but feeling a bite is virtually impossible, unless it's a huge fish, I guess.

Crews and Rayfield had had a good day up to the minute the big fish was hooked.  They had been fishing down from Lilleys' Landing most of the day but ventured up to the mouth of Fall Creek to make a drift, working their jigs along the east bank.  Crews said they were in shallow water, able to see the bottom under their boat as they drifted.  Table Rock Dam was releasing water at a rate of 6,850 cubic feet per second, generating two units at 3 p.m.  Even with the difficulty of the wind blowing his line, Crews still felt a "tap" and set the hook.  That's when the excitement started.

The fish came off the bank where it was hooked and ran toward the duo, swimming under their boat. Crews had to scramble his new rig, spinning it around so that his line didn't catch the edge of the boat or trolling motor.  The trout stayed down almost the entire fight, so Crews didn't really know what he had until the very end, but he knew it was big enough "to probably win the tournament" if he landed it.  Little did he know . . .

"Frank'' eventually headed across the lake to the bluff bank, then switched back to the middle and eventually returned to the inside bank where docks dot the shore.  Yes, the fish has a name  explained later in the story.  Frank then headed to places he's probably familiar with -- the docks.  Crews said he swam under at least two docks. That heightened the high risk that the line might be cut on the dock itself or boats in the docks.  Crews, a seasoned angler, kept his rod way down in the water to keep the line from rubbing on anything that would end his fight.

At one point, Crews said that Frank quit moving.  He thought for sure Frank had wrapped his line around something and escaped.  But Frank was just resting, and a fish that big can do whatever he wants to do.  Eventually, he came out, tired and ready to give in.  Rayfield worked their net over his head and the pair hoisted the fished into the boat.  They were just above Short Creek when the fight ended.

Crews had just bought a new boat and this was its maiden voyage.  Fortunately, the live well was just big enough to fit Frank in, but he filled every bit of it.  Word got back to me that they were boating in with a huge fish, so we had everything ready to receive the package.  Frank was immediately placed in a large, aerated tank on our dock to rest after his ordeal.

We determined right off the bat that we'd try to keep Frank alive regardless if he was a new record or not.  Once he uprighted himself and was swimming around, we pulled him out and recorded a quick, unofficial weight of  33.4 pounds.  He was easily a new Missouri state record.  Now we had to come up with a plan to transport him to the hatchery to be officially weighed.

We filled a stock tank full of lake water and that's where Frank rode, guarded by admirers in the back of my truck on the five-mile ride to the Shepherd of the Hills Hatchery.  Shane Bush was there with hatchery personnel, ready with their official scale to see if Frank made the record books or not.  Everything was done quickly and carefully, pulling him out of the stock tank to the scale, verifying his weight at 34 pounds, 10 ounces, and then moving him to an aerated tank in Shane's truck.  We still had no pictures out of the water, just shaky videos, but the goal was to return him back in the lake as quickly as possible.

We caravaned down to the boat ramp access, less than a mile from the weigh in site.  Shane needed to get some official measurements before release -- 38 inches long with a 27-inch girth.  He confirmed our observations that the adipose fin had been clipped, which identified Frank as a triploid brown trout.  I'll explain what that means later.

The sun was about to set over Table Rock Dam, so we hurried to the edge of the water to take a few pictures -- Crews and Rayfield with the new Missouri state record brown trout.  We slipped Frank into the water, and Crews gently held him there until he swam out of his hand.  We followed him a little ways downstream until he turned and swam close to the bank, holding his own in the swift water.  Frank dashed the record books, survived being fought, handled, trucked, weighed, trucked and photographed and before sundown was back in Lake Taneycomo -- we hope to keep growing and maybe, just maybe, give someone else a chance to catch a state record fish.

Crews lives with his best friend and wife, Rita, and their son Matthew in Neosho, Missouri.  They own Crews Construction and specialize in wastewater treatment plant construction.  He is an avid outdoorsman, but his home waters are the Spring and Neosho rivers as well as Grand Lake, so he rarely fishes for trout except in the annual tournament honoring his fishing buddy.

Frank's story - we've always had trout hovering under our dock, feeding on pieces and parts of fish discarded from our fish cleaning facility.  And on occasion there will be a big trout, either brown or rainbow, stop by for a treat.  They move up and down the lake seeking out the best meal, never staying in one spot very long.

One day about three years ago, Duane Doty (dockhand and guide for Lilleys' Landing) spotted a very large brown.  He stood out from the other trout.  He was a brute.  Duane called him Frank.  Shortly after Frank showed up, another brown trout showed up and he was much bigger!  Duane changed Frank's name to Frankie and called the new addition Frank.  We have since videoed and photographed Frank many times when he has trolled by, so we have good records on him.

To sum up this incredible story up, fishing in a memorial tournament, named after his best friend, Paul Crews hooks a fish in extremely adverse conditions, fights a 34-pound fish on four-pound line for 20 minutes around docks, logs and boat traffic and lands it using a small trout net. He fits it in his live well and keeps it alive while transporting it to be officially weighed, measured and photographed and released back in the lake successfully to keep the story alive.

And Crews says, "Praise the Lord!" 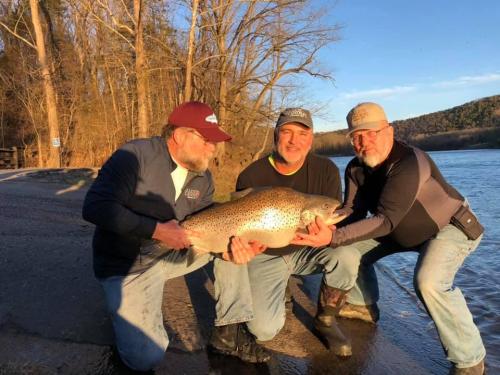 watermen2, liphunter and JUNGLE JIM 1 reacted to this
Sign in to follow this
Followers 1
Go to articles