Our water situation is honestly unknown for Lake Taneycomo, right at the moment.  All lakes in the White River chain of lakes have been dropping over the last week, but Sunday the area received from two to three inches of rain, and the lakes are back on the rise.  Where they end up is the question.  But one thing is for sure -- there will be much more generation for Taneycomo.

Presently, dam operators are running three units at 9,600 cubic feet per second plus five spill gates at 5,300 c.f.s., totaling about 15,000 c.f.s. of water.  Table Rock had dropped to right at 918 feet but it is climbing this morning.  Beaver has been holding at 1,128.5 feet and is also climbing.  If it reaches 1,130 feet, operators will open some spill gates.  Table Rock will not increase its flow unless their level reaches 920 feet , which is doubtful.

The U.S. Corps of Army Engineers has been working on one of the gates that leads to a turbine at Table Rock Dam this week.  They have to send divers down to the intake on the lake side of the dam at a depth of 130 feet deep.  At the same time they're running spill gates, they are shutting down all gates on the north side of the dam close to the divers -- to keep them safe -- and opening the five gates on the south side.

A question was asked on Facebook, "Is the state still stocking trout in to Lake Taneycomo?"  The answer is yes.  Agents are continuing to stock trout as scheduled.

The next question could be, "Is there anyone fishing?"  Very few boats out these days.  It is very, very quiet.

"So how is the fishing?"  The answer is it is very, very good, when they're biting.

Seriously, the quality of trout we've been catching is by far the best I've seen it in my 37 years of living and fishing here.  And I'm sure it's because of the constant generation, the spill gates being open for much of the winter and dumping lots and lots of food (shad) in our lake. The absence of hooks in the water doesn't hurt either, although it hasn't affected the quality of the trout, rather more, the number of fish in the lake.  Virtually no trout are being taken out right now.

The "white bite" is still on although I'm actually doing better throwing a sculpin/peach jig than a white one.  But Blake has been dragging the small floating minnow baits in shad colors and catching browns from the dam clear down to the Branson Landing.  I, in turn, tried dragging a minnow from the resort down to Monkey Island the other day on One Cast and caught one nice brown trout, although I missed several other bites. 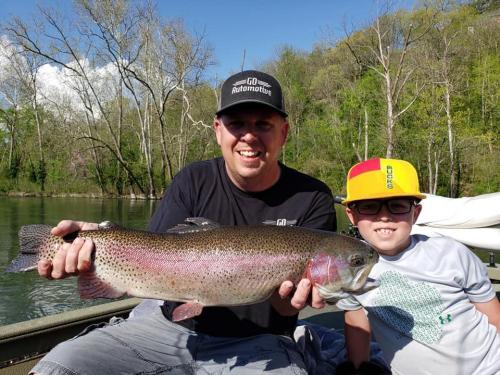 Blake and Duane are both throwing the MegaBass 110+ in white or bone color and catching browns.  Again, they're fishing anywhere from the dam down to Monkey Island and not necessarily working the banks as they usually do.  Blake has been casting and working the middle of the lake and seeing more takes than along the banks.

I do have to be honest and report  that I have not talked to anyone who is drifting PowerBait or night crawlers this past week.  I'm sure they would catch trout anywhere below the Trophy Area.  Blake did drift a scud on the bottom the other day and caught a few but not as many as expected.  We're not cleaning any trout so we're only assuming they're seeing and eating scuds.  They usually do when the water runs this hard. 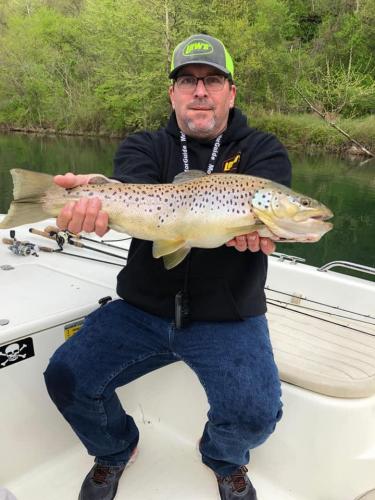 Writing a fishing report these days is very strange.  We just don't have enough boats on the water, so there's not much info to relay.  But we will continue to do our best scope out our trout and pass the intel on!! 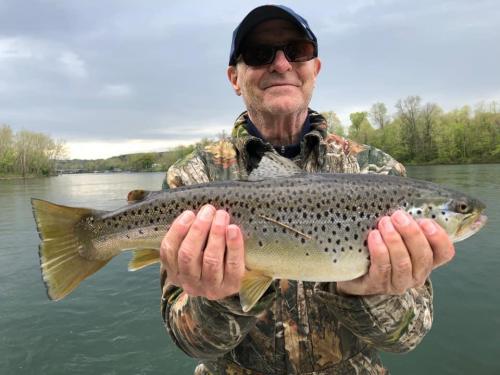