Finally . . . Table Rock Lake is down far enough that generation has been reduced on Lake Taneycomo.  The last couple of days we've seen two units running at about 7,000 cubic feet per second of water flow.  The flood gates were shut Monday morning. Wednesday more rain fell over the White River Basin in N.W. Arkansas and S.W. Missouri, but it looks like that precipitation won't raise the lake levels much at all.  Thursday morning the rain subsided and all three lakes have only risen less than six inches.

Water temperature is 46 degrees.  Less generation means fishing is easier for most anglers no matter how they choose to fish.  The current is less turbulent and the water isn't as deep. 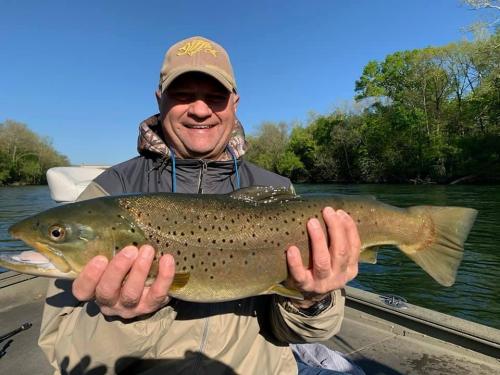 Big trout are still being caught on Taneycomo.  I believe if there were more fishermen, there would be even more big trout caught.  Captain Steve Dickey's client, Randy, caught two trophy trout Tuesday, a 25.5-inch brown and a 22-inch rainbow.  Both were caught on a float and fly rig.  The fly was a shad fly.  Both fish were released.

Since there are few fishing right now, it's hard to know what all is working.  We can report, though, what's been working for us.

We're throwing marabou jigs.  Good colors have been white, sculpin and sculpin/peach, but those are just the colors I've been throwing.  The size of jig depends on the conditions -- the wind, current and depth of water.  We've caught trout on a jig and float using a white jig.  This has worked best from the dam down to Short Creek.

Dragging a small minnow bait on the bottom is catching some bigger trout.  These minnow baits are those like a floating Rapala F-5 using a bell weight or even a split shot to get the lure to the bottom.  Most of these baits have two sets of treble hooks, but we take the front set off and only leave the back set.  This will still hook the fish but won't catch the bottom as well.  A shad color/pattern has been the best.

Some guides are still throwing the MegaBass 100+ and +2 in shad colors and catching browns.  I've heard browns are chasing shad on the surface in the Monkey Island area on down through and past the Landing.  Remember, there's an abundance of shad in our lake right now because of the gates being opened so long in March and April.  Once the water down lake warms up, a lot of those fish will move further down but until then, they will be everywhere.

Hardly anyone has been doing this, but drifting minnows and night crawlers, I predict, will be the killer bait when anglers show back up in normal numbers.  We will see a lot of two-pound rainbows being caught below Fall Creek.

We're seeing big midge and mayfly hatches all over the lake but I don't see the trout keying in on them . . . yet.  The other evening on the lake  there were a huge swarm of barn swallows feeding on midges on the lake's surface.  I thought it was our resident birds come home after a winter migration, but the next day they were gone.  Just grabbing a bite to eat on their trip south, I guess.

I'm look forward to some fly fishing in the coming days.  With lower water slows, we can drop a San Juan Worm and a scud under an indicator and fish the flats both above and below Fall Creek.  We've tried to drag those flies using a spin cast and drift rig in the heavy flows with very little success -- which is surprising.  We'll see if the slower water will change things.

Watch One Cast, our daily fishing video, and you'll find out exactly what we are (and aren't) catching trout on.  You'll find it on Facebook and on YouTube.