Trout fishing on Lake Taneycomo continues to be fairly good.  Since the last rains brought up Table Rock about six inches, operators at the dam have been running two units full at a rate of 6,000 cubic feet per second.  They opened one flood gate, starting last Friday and ending yesterday, which added 1,000 c.f.s of water from the top of Table Rock Lake.  This was to add oxygen to the flow from Table Rock because dissolved oxygen levels started to drop last week, especially down lake, shown by the gauge station at College of the Ozarks, about five miles below Table Rock. Dam.

Table Rock Lake started to turn over almost a month ago when we had a week long period of cold, wet weather.  The water coming. into Taneycomo silted up and D.O. levels rose, indicating definite movement in the layers of water in the lake above.  But very warm temperatures returned, stopping the "turn" in its tracks and ,causing some D.O. issues at the dam.

The liquid oxygen supply was used up, and no more had been ordered since Table Rock was starting to turn.  So when more D.O. was needed, operators scrambled and opened flood gates to help with the D.O. situation.  All the while, two of its four turbines were taken off line for maintenance so they are limited on what they can do with turbine release. 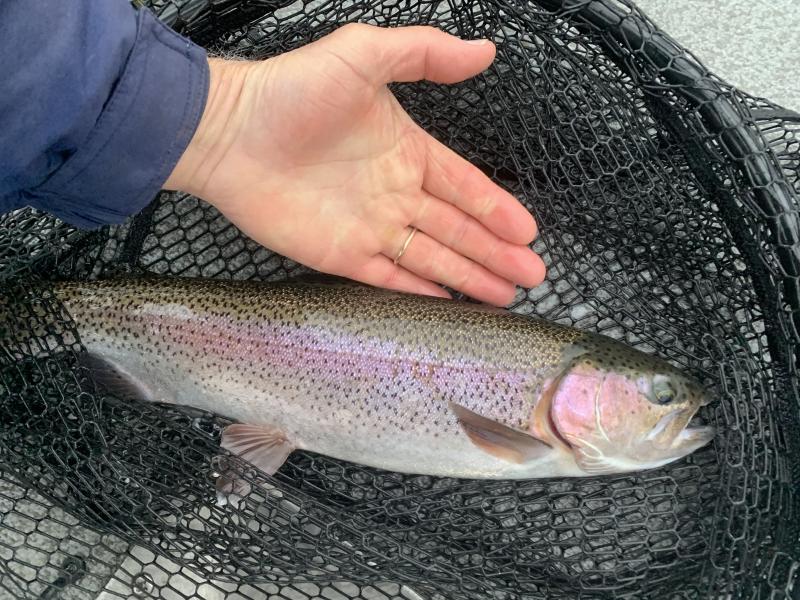 Yesterday (November 30), we saw D.O. level go back and and water temperatures starting to drop.  Also, I noticed the small pieces of vegetation flowing from Table Rock decrease big time.  All these signs indicate Table Rock's water is starting to straighten out, although it's still mixing.  Cold temperatures this week, along with some wind, should go ahead and complete the lake turn over process, and we should be good to go for the winter season.

It's been a strange fall season for sure with long transition that started way back in October.

I'm not sure how all that has affected the trout bite, though.  For the most part, fishing been pretty good with little evidence of slowing the bite down.  I think the junk in the water might have been more of a distraction than a hindrance, but we usually see silt more than pieces of weeds and algae.  City of Branson residents have been treated to bad smelling and tasting water because of the water quality problems spawned by the stalled turn over, too. (We have our own well here, so not an issues.) But hopefully that is all behind us now.

With the present flow -- about 6,000 c.f.s - we have been drifting mostly, dragging bait and flies on the bottom as well as working a jig, spoon or jerk bait.  I think we'll see this flow for a few more days, and perhaps by this coming weekend, we'll see a reduction in flow.  Table Rock is now dropping about three to four inches per day and should be down to about 916 feet (one foot above seasonal power pool) by Saturday.  We could even see some down water next week if rains stay away.

We were wishing that the opening of a gate would spark a "white bite," but it seems like it did not.  One friend, who fished most of last week, did get into some nice rainbows and browns using white jigs but I tried and couldn't replicate the feat.  We are catching a few trout from the cable down to the first island on white jigs; they are quality trout but  not the shad bite we were hoping for.

I have caught fish in and below the trophy area on darker jigs -- black, sculpin and olive -- throwing mainly 1/16th and 3/32nd-ounce jigs on four-pound line.  Most of the fish have either come off the bottom or along the banks. 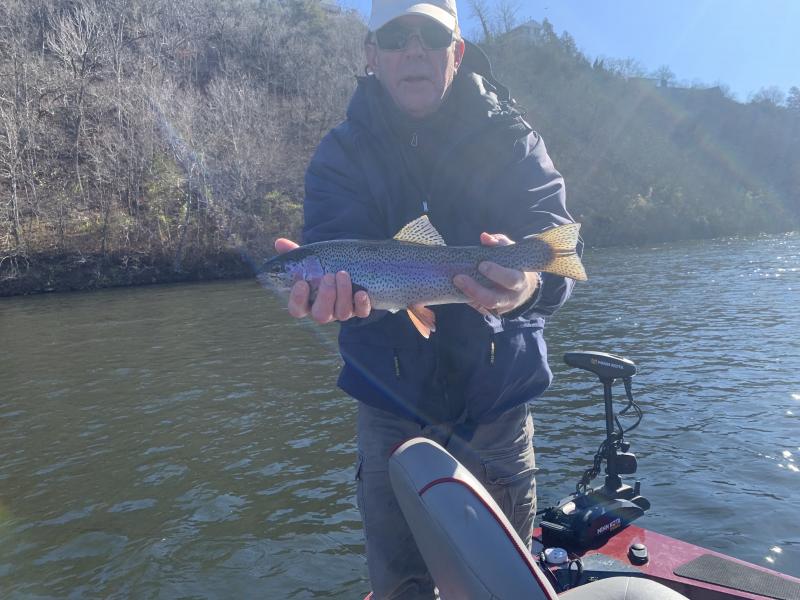 Drifting scuds has really been the best way to catch them in the trophy area.  The weeds and algae are much reduced, so you're not cleaning your flies off every hundred yards, but you do have to drop them on the bottom to get bit.  In most cases, an 1/8th-ounce bell sinker does the trick.  I've also used a couple of #7 split shots to keep the scud down.  We're using #12 grey or tan scuds.  The gray UV scuds are the best especially if the sun is out.  They give off a blueish/purplish color.

Pink San Juan Worms are working, too.  Use the medium size chenille -- the trout seem to see these bigger flies better than the micro or standard yarn.

Egg flies are working okay but have not been the greatest.  They actually should be the hot fly a little later in the month when the rainbows start spawning.  The rainbow spawn should last through the month of January.

With the water quality getting better, we should start carrying minnows again.  With the brown trout moving back down in the lake, I would think drifting a minnow from our place down through Cooper Creek should be good for a big brown.  I'd also test out the Cooper Creek flats, throwing some jerk baits early and late in the day.  They should be down there!

Drifting night crawlers on the bottom from Fall Creek down is producing some nice rainbows.  We've been drifting the scuds down to Short Creek and landing nice rainbows, too.

I've seen a few people trying to anchor in this current and fish below the boat.  If you're going to anchor, do it on the inside binds on the lake where the water is slower and less deep.  You'll have a much better chance to catch fish AND it is much safer.