Table Rock Lake's level has dropped to 915.5 feet, just six inches from its seasonal power pool.  Monday morning, five spill gates were closed, leaving three turbines on line which pushed  about 10,000 cubic feet of water per second  into Lake Taneycomo.  Personally, I am thankful that the U.S. Army Corps of Engineers ran so much water through the lakes above us, but I wish that would continue.  Beaver Lake is still more than nine feet above its normal pool, which means the next rain event the basin gets, Beaver Dam will have to open its spill gates.

At this time, Beaver Dam officials have been generating nonstop, allowing about 3,800 c.f.s of water to pass through.  They are running one of two turbines.  That lake level, though, is not dropping but holding at 1,129.64 feet.  It should start dropping soon, albeit, very slowly.

So we're almost back to where we were 10 days ago.  Table Rock dam operators are running three turbines presently, but there's a good chance we may see only two units running by the weekend as the lakes continue to drop.  You could search out the fishing report I posted two weeks ago and go from there.  Our trout are hungry for the same thing -- scuds, worms and minnows.

There is one difference, though.  During this spill gate event, we spotted numerous threadfin shad in the water close to the dam.  Just Monday during One Cast, we saw one, still alive, swimming on the surface in the Trophy Run area.  The trout up close to the dam are  also taking white jigs and shad flies better than they did a couple of weeks ago.

I would also suggest dragging a small jerk bait or minnow bait either using a three-way drift rig or a carolina rig.

These are some of the baits we carry in our shop and use.  They are floating and vary in length from 2.5  to  3 inches.  We use either four- or six-pound line and a medium to medium-light action spinning rod, preferably  six foot or longer. 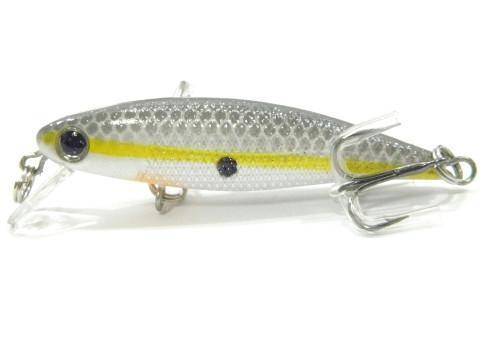 When drifting this bait, of course, you want it ticking the bottom, but there's something else that draws a bite.  Lift the rod, making the lure run a little fast, then let the rod back down.  There's no right or wrong way to do this. . . just try it and see if you get bit faster.

The strike can be pretty hard, or the line may just get heavy and the ticking stops.  It's best to set the hook if there's any question.

You can fish this bait anywhere on the lake where there's enough current to drift this bait on the bottom.

This past week, my fishing buddy John Johnson fished a couple of days with a friend of his.  They did just okay in the trophy area using white jigs and drifting scuds.  They wanted to keep some rainbows, so they ended up drifting a pink San Juan worm from Fall Creek down to Lilleys' Landing and caught some nice trout, more than enough to take home. 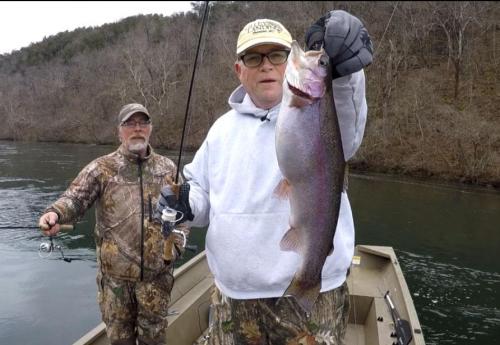 The dock crew at Lilleys' Landing always asks anglers, after a day of fishing, what caught their trout.  Most are drifting bait (worms, minnows and Power Bait) on the bottom at various stretches below Fall Creek.  One thing to note -- some have reported their trout bellies are bulging with scuds when they clean them.

Every time the spill gates are opened and the current increases on the upper lake, it seems our trout eat a lot of freshwater shrimp.  The only reason I can think of is that the shrimp are swept up up of out their hiding places in the gravel where they are easy prey.  Whatever the reason, drifting a scud on the bottom during and soon after these events is a great way to catch trout, especially the older, more experienced fish that are accustomed to feeding on these bugs. 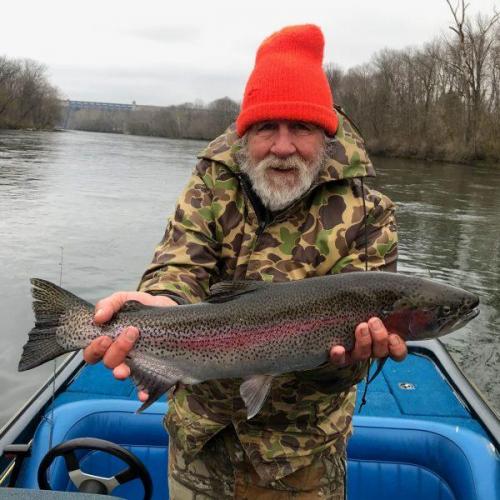 Egg flies are working, too.  These are fished just like the Power Eggs Berkleys makes except they're artificial, made of yarn with no scent.  Bob Berry caught this big beautiful rainbow Monday while drifting below the dam using a peach egg fly.  It measured 25 inches and was released after shooting a quick photo.  Note how dark it is.  Our rainbows are still in their spawning colors, and this male rainbow is a perfect example.

A Y2K will work, too, as well as the Miracle Fly Jeremy Hunt ties.  The Y2k is tied with a bead, and the Miracle fly is tied on a jig head.  I would suggest using the 1/100th-ounce instead of the 1/80th-ounce unless you're going to use it under a float. 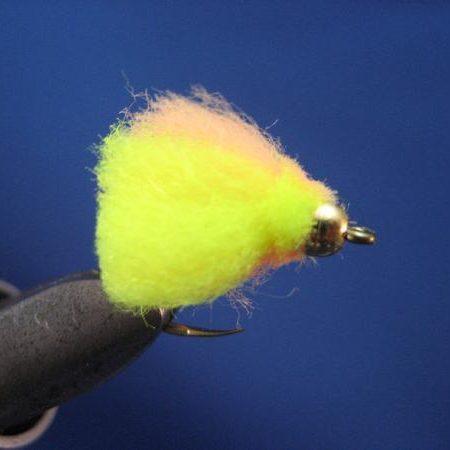 Of course, don't forget about drifting other areas of the lake for trout.  The Cooper Creek area is holding a lot of rainbows.  Monkey Island down through the Branson Landing is too . . . and for sure you need to hit the mouths of Turkey, Coon and Roark Creeks.  Word is there's schools of rainbows in those areas.