As everyone knows in the Midwest (and North Mexico), we're coming out of a extremely cold weather event.  This cold spell will have a huge impact on Lake Taneycomo going forward.  Why do I say that?  Because we get our water from Table Rock and in many places on that lake, it's surface is frozen from bank to bank.  Because it's so deep, the lake will hold this cold water clear through the summer and into the fall months.  We'll probably see temperatures in the upper 30's on Taneycomo later in April and May, may be into June.  And water temps in the fall will not rise into the mid 50's like years past.  This will greatly help water quality for our fall fishing season.

Threadfin shad are not found in lakes to the north of us.  Those lakes get too cold in the winter to sustain a good population of this species of bait fish.  So this cold spell will affect threadfins in all 3 White River lakes - Beaver, Table Rock and Bull Shoals.  We may see some shad die on lower Taneycomo too.

Anglers were already reporting dead shad on Table Rock last weekend.  Even with the warmer winters we've been having, shad die-offs are not uncommon.  But with Table Rock's water temps diving into the 30's, we should be massive shad kills lake wide.  If these shad start dying in the dam area and they reach the depths of 130 feet, we should see threadfins come through the turbines into Lake Taneycomo.

There's no way to know when this may occur.  But typically we see "shad runs" in March on up into May.  We've seen them as late as June and July.  You just never know.

One thing that would help suck these shad through is heavy generation.  During this cold spell, the most generation we've seen in about 150 megawatts or 3 units, three-quarters of the maximum capacity of the system.  Not sure why they didn't run it a full capacity seeing the power demand we've had.  They're not running 2 units during morning hours and backing it down to less than one in the afternoons.  Table Rock is almost a foot below its seasonal power pool (914 feet).

Going forward, our weather looks to be mild and relatively dry so look for minimal generation with possible periods of no generation.

Trout fishing, when there has actually been anglers out on the lake, has been pretty good.  It does seem like it's much better when generation drops to the 2,500 cubic feet per second flow we're seeing in the afternoons.  Our water temp has dropped from 43 to 41 in the last 2 weeks and will probably drop even more in the coming weeks. 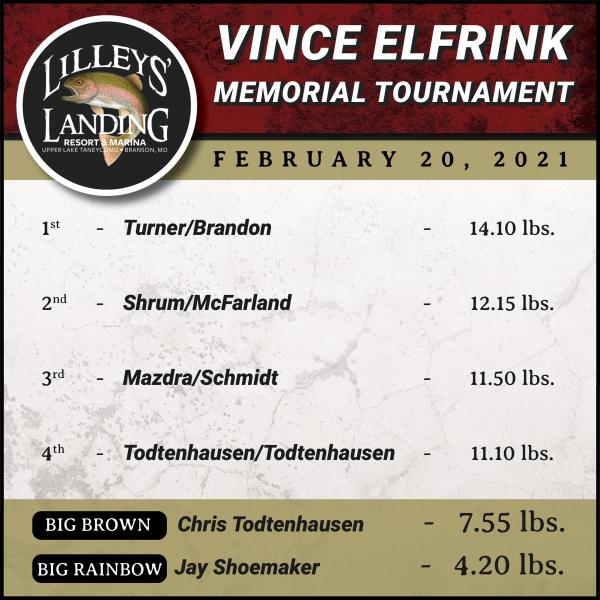 Elfrink Tournament is over.  Not quite the weights we've had at the last 3 contests but still much better than past years.  Bright sunny day with very little wind may be did not help.  Most were caught on jigs but there were a few of the big trout that were caught on jerk baits early in the day.

This was a catch-n-release tournament, artificial only lures and flies. 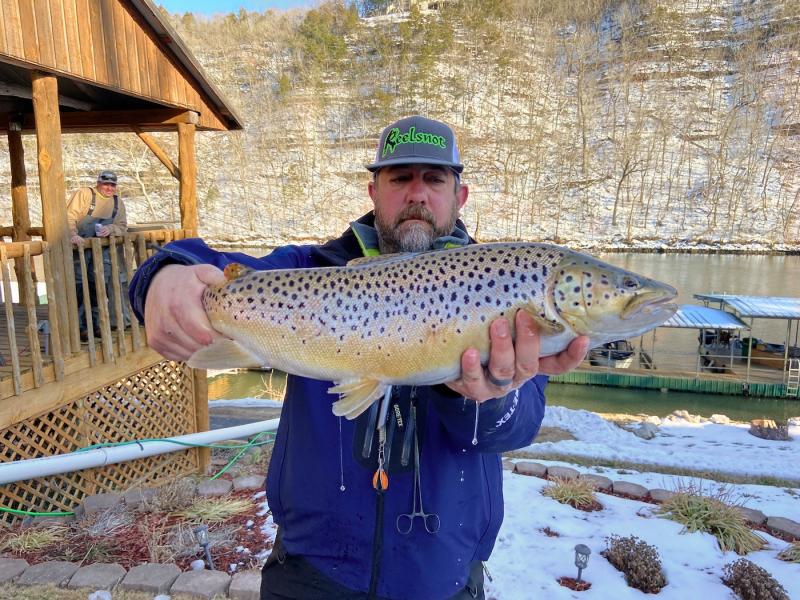 Reports did come in of rainbows caught close to the cable at the dam that were spitting up shad.

A lot of anglers fished a jig or fly under a float.  Sculpin/ginger and black were hot colors. 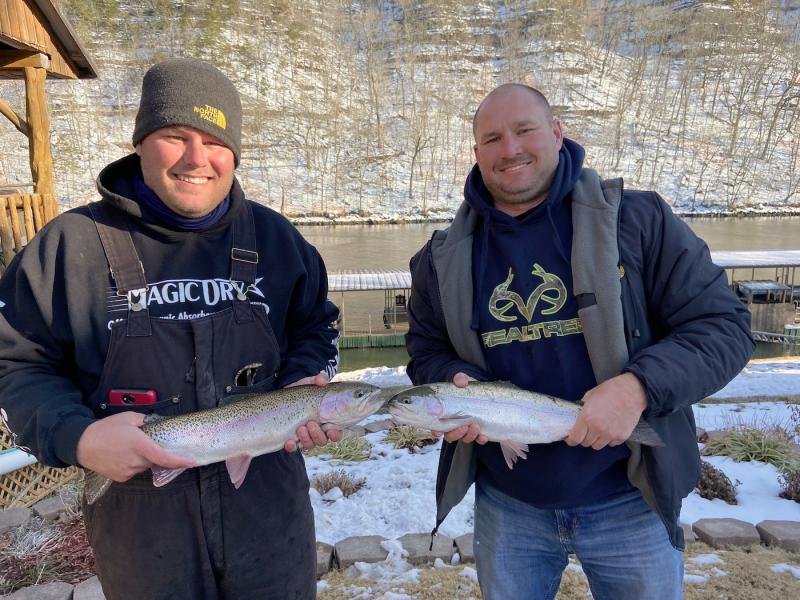 Me and Duane were talking this morning about shad kill.  There is a good population of threadfin shad living in Lake Taneycomo... we tend to forget about that.  They live in the lower half of the lake where the water temp tends to be higher but I wonder how far up lake would you find them?  Reason being... they should be dying on our lake like the other area lakes.  Bass and trout should be feasting on them.

We were also talking about below Powersite Dam - in Bull Shoals.  If shad are dying above the dam and getting sucked through the turbines there, walleye and brown trout, among other fish, should be getting a good dose of shad.  That sounds like fun!