I'm sure glad I didn't write an extensive fishing report on Monday for Lake Taneycomo because everything changes today.  After more rain fell in the White River Basin above Lake Taneycomo in the past 24 hours, the U.S. Army Corps of Engineers have decided to open 5 spill gates at Table Rock Dam one foot each this morning, on top of the 3 turbines running at the facility.  That equals 15,000 cubic feet of water per second pouring through Taneycomo presently.  This equals 4 full turbines.

Beaver Lake is inching up and is at 1128.66 feet, less than 18 inches below its flood pool level.  The Corps really haven't made any attempts to drop this level since they had it down to 1121 feet about 3 weeks ago.  Table Rock Lake has been holding steady at about 916.5 feet but is now rising slowly because of the rains.  Its seasonal power pool is 915 feet but with Beaver so high and Table Rock rising, they really need to move some water!!  I'm not sure why they aren't dumping Beaver Lake plus they have been only running 2 units at Table Rock the last 5 days.  They need to keep moving this water through... please!! 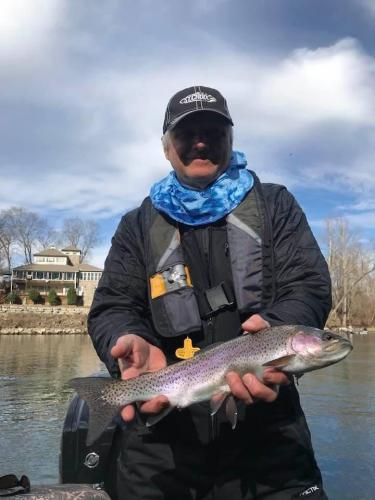 Fishing continues to be very good, even with heavy generation.  With the spill gates coming back on, there's always the chance of threadfin shad coming over, plus a few bass and walleye.  We will be testing the waters!!

We have 3 trout tournaments under our belt so far this winter and in the last 2 contests we saw very good quality rainbows come in which is a great sign.  Our first tournament was plagued with off colored water after a big rain so fishing wasn't very good.  This last Saturday, out of 76 teams, 50 weighed in 7 pounds or more, an 8 trout bag.  That's very good.

There are a lot of rainbow trout to be caught in the Branson Landing area right now.  We've been fishing down there and catching big freshly stocked rainbows that are over a pound each.  We were catching them on various colored jigs while fishing for crappie -- yes crappie!

Some of the tournament contestants were fishing an 1/8th ounce jig on the bottom down close to the Kanakuk Camp and catching rainbows too.  I'd imagine you could catch them on PowerBait as well.

With more water running from Table Rock, we'll go back to heavier weights to get to the bottom when drifting baits, lures and flies.

There is a pattern we've seen when they first kick more water on and that is scud flies get real hot.  It might be because the heavier flows dislodge scuds from the bottom and up into trout's mouths.  It's plausible!  So we'll be drifting big #12 gray scuds from the dam down to Short Creek this week along with an egg fly and/or a San Juan Worm.

If you don't book a trip with Duane Doty and don't have his custom painted jerk baits, the MegaBass 110+ is a good match to throw for big browns and rainbows.  Good colors would be French Pearl,  Ozark Shad, Perch and Elgy Bone. 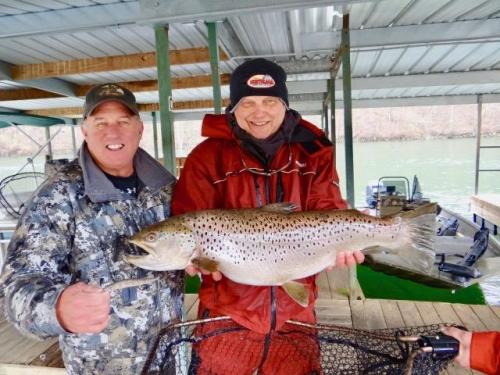 One of our Outdoor Writers who attended our conference this week brought in a big brown just as I was writing this report this morning.  John Neporadny, nationally recognized fishing writer recently inducted into the Freshwater Fishing Hall of Fame,  caught and released this 13 pound brown on one of Duane's jerk baits.  He caught it below Fall Creek about a half mile around the docks.  He was fishing with Scott Pauley, outdoor marketing representative for Missouri Tourism.

So we're back to dragging hard minnow baits on the bottom using the carolina rig, 1/4rd-ounce bell weights and 4 to 6-pound line.  We carry several lengths and styles in our shop, knock-offs from China because we do lose quite a few baits to the bottom monsters.  These baits are like the F-5 and F-7 Rapala, from 2.75 to 3.25 inches long, floating and shallow divers in perch, shad and sculpin colors. 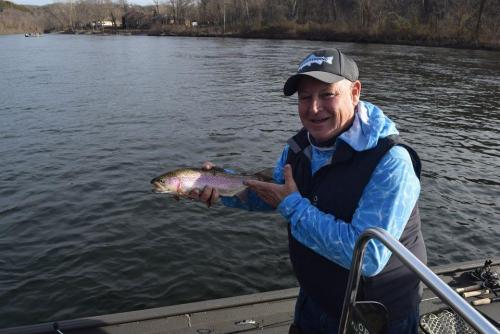 Bill Babler, fishing guide, showed us this week that when he drifts these baits, he takes the front set of treble hooks off the bait, only leaving the back set.  He says he doesn't lose as many baits and believes he doesn't miss any fish because of it.

We will be throwing 1/8th ounce white jigs up below the dam this week along with other colors like sculpin, brown and black.  But white has been a pretty good color lately... white with gray and white with black also.

REPORT:  They are liking white jigs below the dam!  Here's evidence: 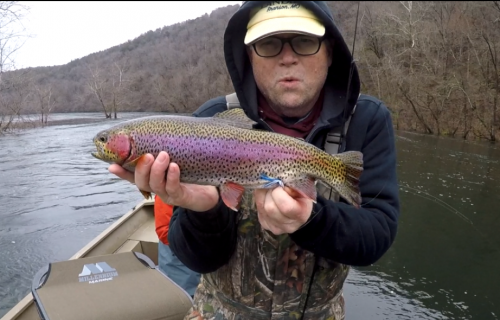 Snagged in the butt... but still a beautiful rainbow!! 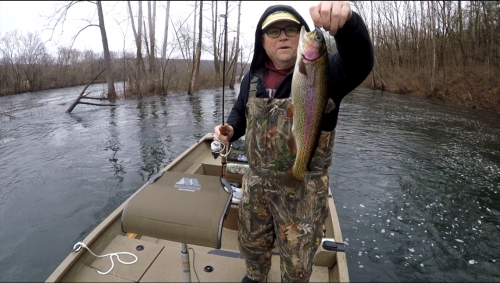 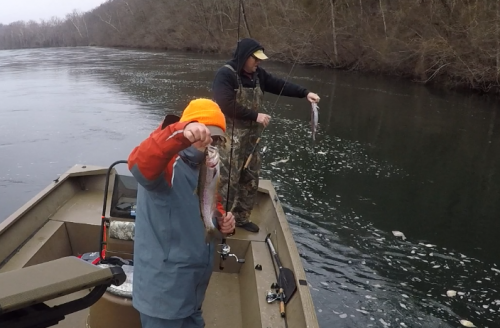