Turbines and flood gates continued to move water from Table Rock Lake into and through Lake Taneycomo this past week.  Rains Thursday and Friday kept the U.S. Army Corps of Engineers from making any headway, though.  Beaver Lake's level rose slightly to 1,126.5 feet while Table Rock's level remains at 919.1 feet.  Operators are running 15,000 cubic feet of water per second through Table Rock Dam, equal to four full turbines.

We had a very busy weekend with lots of boats on the lake.  Despite the heavy flow, most anglers did exceptionally well.  Almost everyone was drifting something on the bottom -- from shrimp (yes, the ones from the ocean) to minnows and worms, and from Power Bait to flies and jigs. 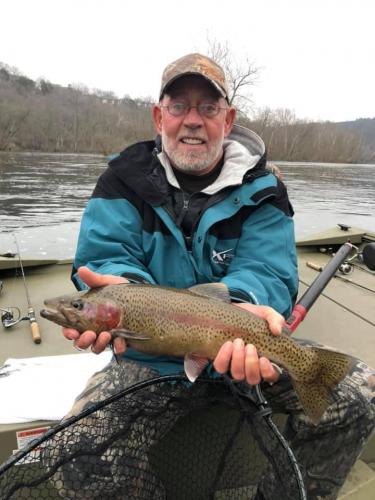 Anglers reported catching "nothing but brown trout" drifting minnows on the bottom from Cooper Creek through the Branson Landing stretch.  No one bought in or told us of any browns caught longer than 20 inches, though.

Scuds (freshwater shrimp) flies continue to be one of the hottest baits to catch trout, both above and below Fall Creek.  You'll need at least a quarter-ounce weight to pull down to the bottom and drift basically down the middle or a tad on the inside bend of the lake.  A #12 gray is the best size and color. Of course, there are quite a few shades of gray, at least in our shop.  And we're using four-pound clear or green line -- no need for two-pound simply because of the speed your fly is flying by the trout. They have no time to snub their noses based on the weight of the line.  Those trout only have a fraction of a second to react -- whether to eat or pass. 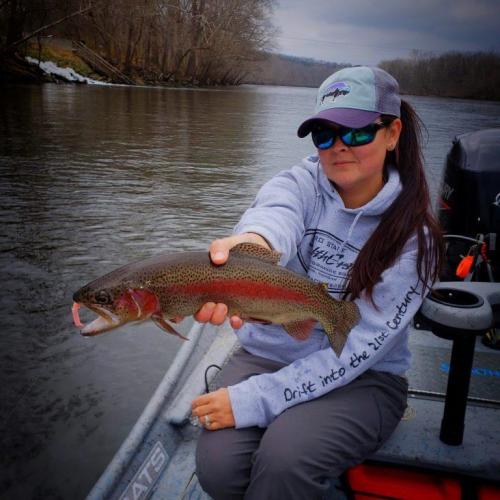 Other hot flies are the medium cerise San Juan Worm and the Mega Worm, reported by Flys and Guide's Lisa Bellue.

The best stretch to drift is from Lookout Island down to Short Creek with the Narrows taking the hot spot designation. 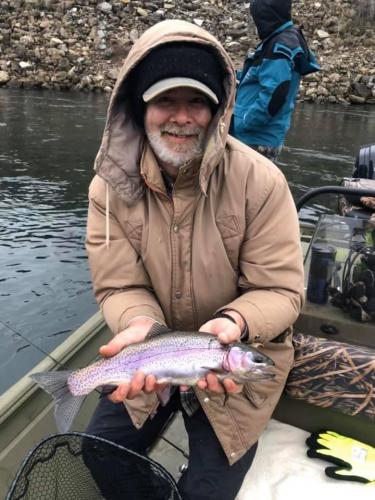 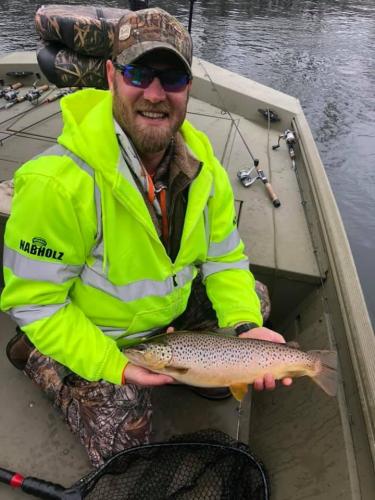 Last week, Duane (and others) saw threadfin shad in the water below the dam.  These small bait fish come over from the spill gates from Table Rock, along with other warm water species of fish, into Lake Taneycomo, and our trout love to eat them.  Unfortunately, we haven't seen evidence that many of these bait fish have come over the dam in the last couple of months, but we hope we're seeing the beginning of a "shad run," as it's called.

Some of the guides have been drifting white jigs and shad flies below the dam and have been picking up some nice rainbows and a few browns.  If and when we get a true shad run, catching will get really, really good with shad lures and flies.

I would also suggest to try dragging small stick baits like F5, floating Rapalas in shad colors using a carolina rig with a  quarter-ounce weights.  We carry a cheap knock-off in our shop -- cheap because we tend to lose a lot of baits to snags on the bottom.

For bank fly fishing below the dam,  fishing a gray or tan #14 or #16 scud under an indicator at the hatchery outlets has been about the only good access, but fishing those locations has been very good.  Also anglers are catching fish on San Juan Worms.