We are back to low-flow releases here on Lake Taneycomo after a few weeks of a higher release rate, which has brightened the fishing prospects for boaters and waders alike.

Area lakes rose almost four feet after a series of rain events caused releases from all four dams in the White River chain.  We saw flows up to 8,000 cubic feet per second here on Taneycomo, which is a little less than three-quarters capacity through our dam's turbines.  Now that the lakes are below their seasonal power pool levels, flows have been reduced to a "trickle."  Beaver Dam's turbine is actually off-line and operators there are releasing a little water over one spillway.  Table Rock Dam is releasing about 2,000 c.f.s. of water.

The big question now is . . .  will the water be turned completely off for Taneycomo?  The simple answer is, "Who knows?"  Officials might, but  they did not turn it off the last time lakes levels dropped below 915 feet on Table Rock, so it seems unlikely.  But, during the early morning hours Saturday,  they did shut it down for a couple of hours.  One can only hope.

At this current flow, wading and fishing below the dam is possible, all along the banks at the hatchery outlets, down past the boat ramp and along the chute to Trophy Run.  You can also boat up and wade the trophy area at Lookout Island and on down, wading the shallow side of the lake to the Narrows, then again across from the boat ramp at Fall Creek condos.  I've also been seeing people wading in at and above the boat ramp at Riverpointe Estates.  The park area above the ramp is now public, and the lake can be accessed there.

Blake and friends have been going up to the dam and wading the hatchery outlet bank at night,doing quite well throwing streamers.   They're also throwing jerk baits and jigs and catching good rainbows, a few browns and an occasional warm water fish like a walleye or small mouth bass.  With the reduction in flow, this fishing should only get better.

Here's a report Blake wrote on his night wading experience:

Over the last six nights in a row I have been fishing streamers up at the dam.  The flow each night was approximately a half unit, give or take a few cfs.  Learning how to get the streamer into position through the drift took a few nights of playing around with and a long conversation with @duckydoty!  However, after some adjustments to my technique, which included a five-foot slow sinking leader and a short, two- to three-foot piece of 2x tippet on the end of that -- also learning that my rod tip was supposed to stay in the water -- my success and hook up rate increased drastically over the last few nights.  I had one night in a three-hour period when I caught more than 20 fish and one trophy! All primarily on the black pine squirrel streamer. I tried other colors, but black seemed to be the hot color this past week.  Also, each night I fished from the cable down to Outlet 2 -- that is where I fished every night!

Scuds still rule catching big trout.  We're still seeing a great population of scuds in the lake, in the gravel as well as in the vegetation along the banks and in some main channel areas of the lake.  Dragging a scud using just a tiny bit of split shot on the bottom is working pretty well,  but a better way to fish the scud is under a float, either using a fly or spinning rod.  Add a split shot to get the scud down or tie your scud on a small jig head.  Best colors are gray, olive or brown right now, and you may have to use a smaller fly with the lower flow, say, a #16 or #18.

You can drift a scud anywhere between the dam all the way down past Trout Hollow.  I would suggest fishing them under a float even down to Cooper Creek.  We know there are scuds living in the vegetation along our bank at Lilleys' Landing.  You can use four-pound line and do okay, but I'd go to two-pound and catch more fish.  Fish them at different depths, from four- to nine-feet deep. 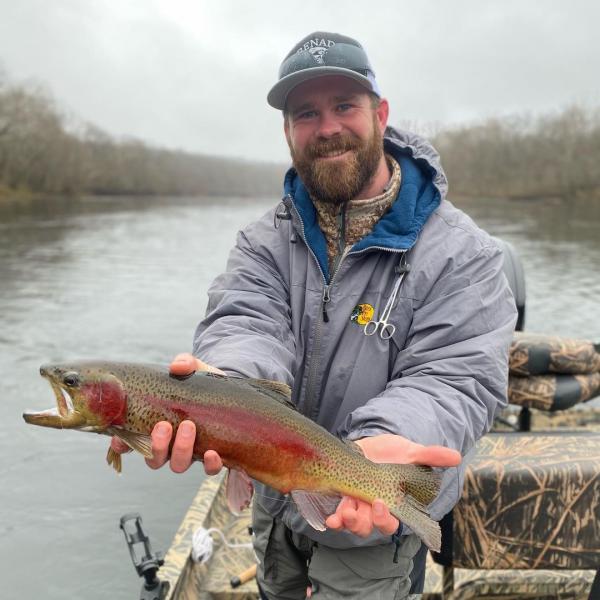 Jigs have made a comeback, at least for our crew and others who have been reporting on Facebook. With this low flow, smaller jigs should be working better than the heavier ones we've been throwing.  The 1/16th-ounce jig, with either two- or four-pound line, has been the best, working it just about anywhere on the upper lake, trophy area and below.  I have noticed that you have to fish close to the bottom to get bit.  I haven't had any luck fishing jigs either close to the surface or even mid-depth.  The fish want them almost dragging the bottom.

Good colors have been brown, brown/black, brown/orange, sculpin and sculpin/peach.  Orange heads seemed to be working better than brown or sculpin, at least by the number of jigs we're selling in the shop.  White also have been catching a few brown trout, mainly up close to the dam.

Drifting minnows on the bottom from Fall Creek down to Cooper Creek has been very good.  Use the smallest split shot to get to the bottom, hook the minnow in the lips and let it drift.  The trout we've been catching have been pretty aggressive  on the take.  You have a good chance of catching a brown trout with this technique.

Also, drifting Berkley Power Eggs and night crawlers on the bottom is working. We're seeing some very nice rainbows caught, not just in the trophy area, but all over the lake.