Generation patterns for Lake Taneycomo have been consistent over the past 4 weeks.  They've been running 2 units at about 6,500 cubic feet of water per second with the exception of a 7 hour period between 3 and 8 p.m. everyday.  Table Rock's level has dropped to 724 feet, only 9 feet over power pool.  It's dropping about .25 feet per day.  We've had very little rain over the whole basin although there's been some isolated downpours delivering a lot of rain to small areas.  There isn't much rain forcasted for our area for the next 2 weeks.

Taney's lake water temperature is 52 degrees.  It has only risen 1 degree in the last month which is a good thing although 52 is pretty warm for this time of year.  It should still be down in the high 40's.  But the trout don't mind.  They've been very active, enjoying the warmer water along with forage fish and other fish food.

Missouri Department of Conservation continues to stock rainbows via boat and truck.  June, July and August are the highest months of the year for stocked trout in Taney at roughly 64,800 stocked each month.  The average size of rainbows stocked in 11.5 inches annually.

We are seeing a very good number of rainbows that have been in the lake for several months and have lost their "stocker spots and color", showing off their natural colors of red, pink, silver and green.  Our trout are still very health looking -- fat and hard fighters, although I have caught a few rainbows that didn't fight hardly at all.  This could be a sign of low oxygen in the water.  I have not been able to test the water for dissolved oxygen yet.  I am waiting on a part for my meter.

Oxygen in our water we get from Table Rock typically starts to drop in July and continues on into December until Table Rock "turns over".  This is a natural occurrence in most tailwaters because the lake above stratifies during the summer.  The good, cold water from winter months gets sucked out of the lake through pipes at the dam down 130 feet in the lake.  This video simulates how this happens and what it looks like throughout the year.

Of course the blue is good, cold, oxygenated water and the red is warmer water void of dissolved oxygen.  Liquid oxygen is injected into the turbines which mixes before being released into Lake Taneycomo.

Early in the morning is by far the best fishing.  Most of our guides are on the water by 6 a.m..  The fog on the lake hasn't been too bad, although it is foggy and you have to take it slow anywhere you go.  Depending on the day, it's burned or blown off the water by 8 a.m..

If you're spin fishing and fishing the trophy area, jig fishing has been very good.  I've been throwing white 3/32nd-ounce jigs using 4-pound line and hooking some nice quality rainbows just about anywhere from the dam down to Short Creek.  I'm not necessarily working the bluff banks but working out from the bank and keeping the jig close to the bottom. 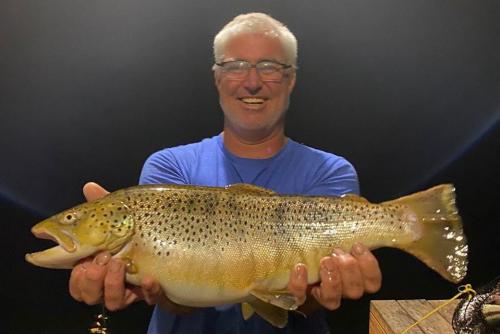 Steve landed this 7 pound 22 inch brown Saturday night from the dock at our unit #24 using powerbait nuggets. The fish was struggling, but he put in the extra effort to make sure it was revived before fully releasing it.

Some mornings, there's a lot of midge action.  Trout, mainly rainbows, are coming to the surface and take midge flies out of the film or on the top.  Throw a small 1/32nd-ounce jig using 2-pound line and work it fast, close to the surface.  See if these feeding rainbows will chase and take the jig.  Good colors are black, olive, sculpin, black/yellow and brown.

Blake has been doing pretty good dragging a 762 or a 606 jerk bait in shad colors.

Drifting night crawlers from Fall Creek down has been producing very nice rainbows.  I believe these rainbows have moved down from the trophy area after growing up protected by the slot limit.

Gulp PowerEggs in orange or white have been catching mainly rainbows, drifted from Short Creek down past the Branson Landing.

Back to throwing the marabou jig... sculpin/peach has been hot, fishing it from Trout Hollow Resort down through our place, working it mid lake and close to the bottom.  If they're running only 2 units, use a 1/16th or a 3/32nd-ounce jig and 4-pound line.