It's been quite a week, here on Lake Taneycomo.... and in the rest of the world.  We thought we might be flooded by the tropical storm Cristabol but the rain didn't fall as hard or and much as thought.  Now it appears we are in a prolonged dry spell which hopefully will last a few weeks or more.  Not hoping for a drought... just hoping for no deluges.

Our lakes are still full, above us and below us.  And it looks like they are releasing some water from the lower lake, Bull Shoals.  If the U.S. Army Corps of Engineers goes by their plan, they will drop all the lakes equally, keeping them at about the same percentage full as they do.  This will mean some generation here on Taneycomo, but regulated.  We might see some periods of no flow, as well as slow flows.  We may see them settle in to a pattern later this week.

Trout fishing continues to be very good for most anglers, although today the wind is making everything tough.  I guess this is still spring and this weather definitely feels like it -- windy and cool.  But summer days are coming. 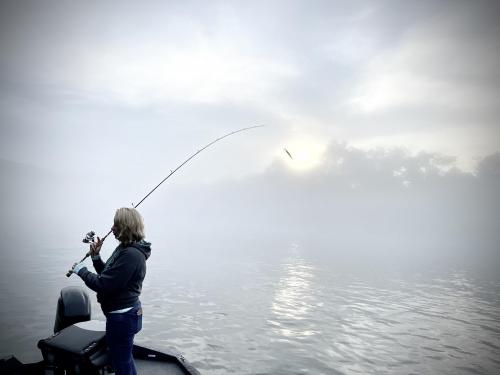 Seth and Becky spent a full week here catching fish... and I have to say "fish" because they caught a lot more than trout.  I'll dot this report with their fish pics. 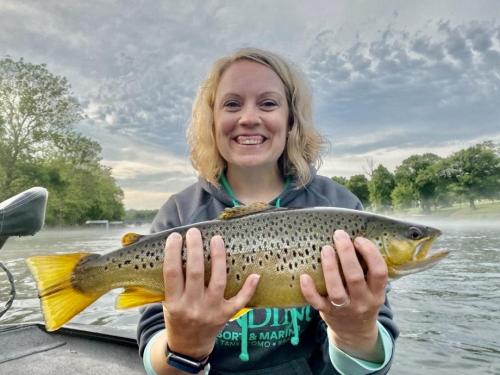 They spent a lot of time throwing a jerk bait from Short Creek down to Monkey Island.  I think becky got the best of Seth in the trophy numbers game but Seth beat her in the biggest brown and the most warm water fish species.  Bottom line -- they fished hard and were rewarded with some nice catches.

With one unit running this morning, we witnessed a string of guide boats drifting out in front of the resort's dock, catching rainbow after rainbow on the pink PowerWorm under a float.  They were really hammering it.  With the water clarity not as clear as normal, 4-pound line is fine when using just about anything right now.  And with the cloud cover today, the fish aren't quite as deep as they are when the sun is out bright so they're fishing the pink worms about 4- to 5-feet deep. 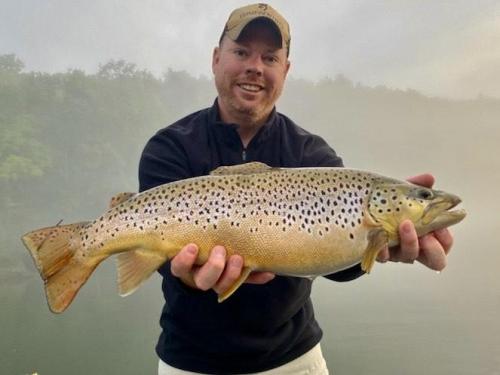 The pink worm under a float will worm most areas from Fall Creek down to the Branson Landing.  If you find a spot where you're catching quite a few, they're probably freshly stocked rainbows schooling together.  Stay with the school as long as you can keep catching. 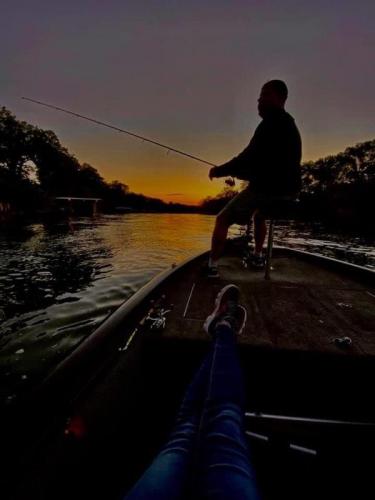 A fair number of people are drifting and casting spoons and catching fish.  Use 1/8th- to 3/16th-ounce spoons with either 4- or 6-pound line.  When it sunny and bright out, let the spoon sink and work it deeper then when it darker outside.   You can also troll using a spoon.  If the water is running, troll moving down lake.

Drifting a scud (freshwater shrimp) is still working exceptionally well.  But the key will be using the correct size weight when drifting.  Of course this will depend on how fast the water is running.  Start with an 1/8-ounce bell weight (or split shot) and add weight if needed.  Use a #12 scud in grad shads, olive, tan and brown.  As summer moves along, it seems like our trout grow wise to this fly so we usually have to drop in size which works most of the time. 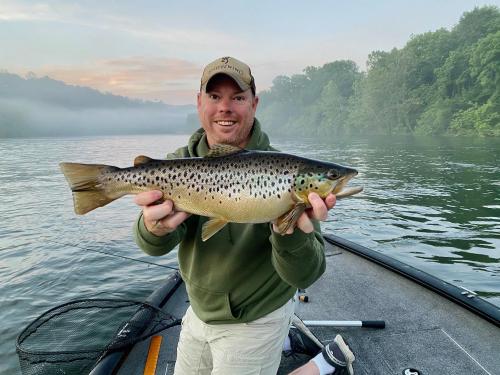 Other flies that are working are the medium San Juan in cerise and pink, the egg fly in peach and the shad fly, although we're not doing quite as well as we were last week.

I talked to a couple of guys on the water this morning.  They said drifting a small jerk bait on the bottom was working for them.  This should pick up bigger trout on average although they said they had not caught anything big this morning.

Rob Dickerson is back this week throwing a KVD jerk bait.  he and his buddy aren't doing as well as Rob did back in May when he caught and released 14 brown trout over 20-inches in 10 days of fishing but they are landing some big browns up to 23-inches.  They're finding out that most of their bites are coming in the middle of the lake instead of working the banks.   They're fishing from Fall Creek clear down to Monkey Island.  Surprisingly, they're not doing as well throwing it up in the trophy area. 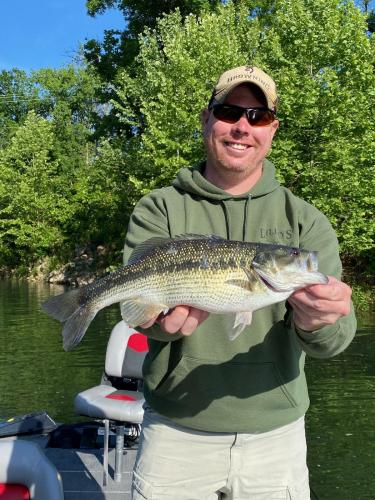 With the water off and/or up to 2 units, you can fish flies and jigs under a float.  One fly that's overlooked is the mega worm on a jig head.  I'd try white, peach or cream around docks where fish are cleaned because trout do eat trout guts.  But remember it is not legal to use any part of a game fish to catch another game fish.

I've have seen a fair number of trout taking dry flies off the surface lately.  Unfortunately, I haven't had the chance to test the waters and see if they would take a fly on the surface.  I have been doing very well catching rainbows stripping woolies, cracklebacks and soft hackles in choppy conditions early and late in the day when the trout are feeding on midges hatching.  Our trout rarely "look up" and take things off the surface like hoppers, ants, beetles and other insects.  But this year we have a good number of very mature rainbows who have grown up in the lake.. I'm hoping that they are educated in the ways of eating dries so that we can start throwing and catching trout on dry flies.  That would be a blast! 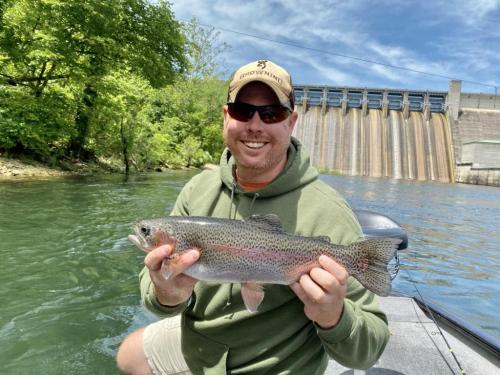 Night crawlers are still catching fish, but we've heard worms might be in short supply in the near future.  No it's not China this time... it's Covid.  Seems as if there's issues with the northern border and/or packaging them in Canada.  We'll see if they run short.  We do still have minnows though!