In this Lake Taneycomo fishing report, I will talk a little about how the fishing has been and about lake conditions in the next few days, but everything will change by the end of this week because of the rains forecast . . . it's supposed to start raining later today and continue for the next week.

We had some slow-to-no generation the last few days, which has been a nice change from the heavy flows.  Beaver Lake remains just below its flood pool at 1,129.4 feet (flood pool starts at 1,130 feet) and Table Rock is a bit high at 917.2 feet.  Its power pool is 915 feet.  So any rain that falls above Table Rock will have to be released through Taneycomo.  If Table Rock rises to or above 920 feet, officials will have to open some spill gates. 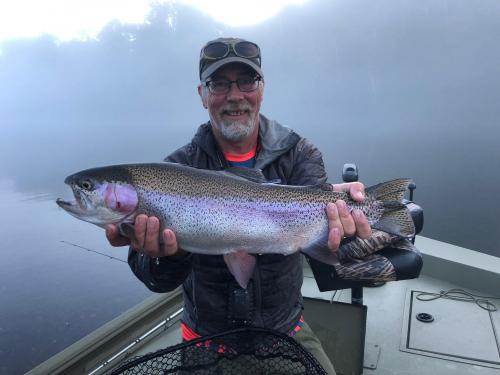 Table Rock's spill gates have been opened more in 2020 than any other time in the history of the dam, partly because one turbine at the facility had been off awaiting repair, so releasing water over the gates made up for the shortfall.  Now that that turbine is fixed and working, we're back to normal operation.

Water coming over the gates will bring warmer water into Lake Taneycomo, averaging 60 degrees.  This will make our trout happy -- since they like 60-degree versus 47-degree water.  That flow will also bring in more warm-water species of fish including threadfin shad which, again, our trout love!  The only downside is that fishing from docks and the bank will be very tough, if not impossible, especially in the upper end of the lake.

Here's what we've seen here in the last week or two -- big trout!  For more than a month, Blake and Duane have been experimenting and garnering great success using bait fish type lures to catch mainly big browns.  Of course, Duane developed a jerk bait series of lures, custom painted and geared to catch big browns.  But they also have zeroed in on areas that are holding these browns and have landed multiple trophies for themselves and for clients. 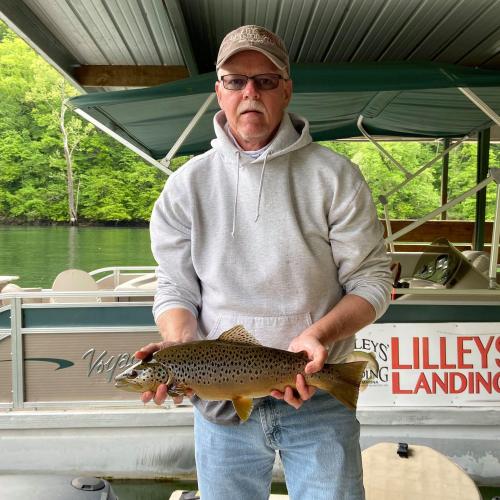 Others have joined in on the fun.  Rob from Kansas stayed here at the Landing for about 10 days and landed more than a dozen browns longer than 20 inches on a KVD suspending jerk bait.  Other anglers,  including out of town guests and even locals, have also landed browns on jerk baits.  Then some fishermen have found brown trout targeting jigs; white has been good but so has sculpin/peach colors.

And then there are the big rainbows.  I personally have landed a 23-inch rainbow trout and a 22-inch rainbow on successive days, one on a jig and one on a zebra midge.  Other rainbows were caught on jigs and flies (scuds mainly) in the upper end of the lake.  On Saturday afternoon, there was no generation here for the first time since last fall.  I understand locals and near by residents flocked to the area below the dam to enjoy wade fishing, and they were very successful catching numerous trophy rainbows on flies.  The low water was unfortunately short-lived.

Some observations of fish activity lately:

All this to say that the fishing future of Lake Taneycomo looks extremely bright, thanks to a broken turbine, lots of rain and a world wide pandemic.

How to catch fish?

You've read a little about what we've tried.  I did not mention that I went out this morning (Monday, May 11) and cast a big, white articulated fly on an eight-weight fly rod with a 400-grain sink tip down at the Cooper Creek flats.  No takes today,  but I think the right big fly should get some love in the coming days. It will be worth a try for sure. 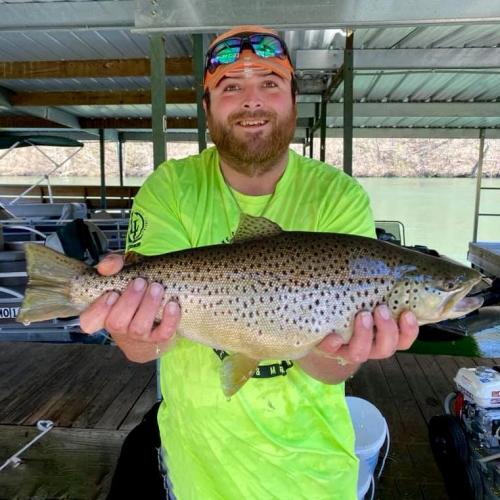 We're getting in a variety of jerk baits in our fly shop.  Rouge makes several suspending jerk baits as well as Smithwick that aren't too hard on the pocket book.  Bass Pro has their KVD series.  You want a suspending bait that dives down from 5 to 10 feet.  For colors white has been good but I'd try others also.  Hard to know what they will take.  I think it's more action that style.  Keep watching One Cast.  Blake and Duane will keep throwing their baits, so observe how they work them. I think that's the most important thing about fishing jerk baits -- how you serve them. 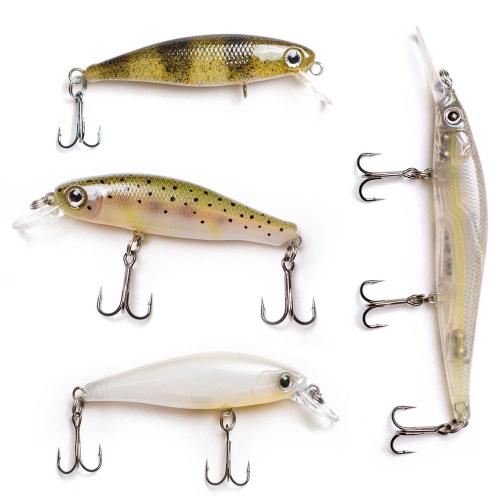 We are selling Duane's signature series jerk baits, custom painted, on our website now.  They are proven to catch trout.

And that's not to say smaller, medium sized jerk baits won't work.  Try what you have in your tackle box before buying a pile of baits.

I've been forcing myself to throw a white 1/8th-ounce jigs where the guys have worked their jerk baits, and, so far, I've caught one 20-inch brown.  If they're looking for shad, the white jig will work.  Rob did catch one of his browns on a white/gray jig.  And I caught the big rainbow yesterday on one so white is still a color you should be throwing.  It's just not catching as many as it did back when shad were coming over the spill gates from Table Rock Lake.

Jig colors that have been catching good numbers of trout have been black/yellow, sculpin, sculpin/peach, tri-olive dark, ginger and sculpin/orange.  If you're using a jig and float, a sculpin/ginger/orange head 1/50th ounce (PJ's Jig) is working.  I'd almost go to two-pound tippet when fishing a jig and float and fish it from four-six-feet deep most of the time.  A Turner Micro Jig in brown, ginger or olive is working, too. 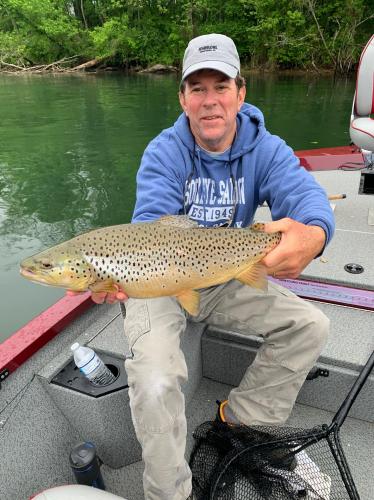 Now I'd love to report bait fishing is pretty good, but I'm not sure I can.  I took out some friends on Saturday when the water was off and tried a night crawler -- even pumped it up with air to float off the bottom -- and did not get a bite in two hours in three different locations! It was unbelievable!  That doesn't mean they're not hitting them at all . . . but it means something.  Powerbait hasn't been working too well either.

What's been working extremely well is the Berkley Pink Power Worm under a float.  Even if operators are running up to three units, fishing down at the Branson Landing area has been very good lately.  Fish it with four-pound line and about five- to seven-feet deep under the float.  You can also hook it on a #8 hook and fish it drifting on the bottom using a split shot or a drift rig.

So now the scoop for when the water starts running again -- and when I say running I mean three-plus units.

Those small jerk baits are still working pretty well from the dam down through Short Creek.  At our shop, we really had a run on them, but we still have some in stock and more coming.  You ca drift them on the bottom using a drift rig setup, but even better should be a carolina rig setup.  You don't have to use as much weight as you think since the lure itself will take you to the bottom with its action.

Speaking of action, the bigger crank baits will work if four units or more are running (15,000 cubic feet of water per second).  The Bomber Fatfree Fingerling in shad colors has worked well for us.  Just throw it out upstream and hold your rod tip just under the water's surface while cranking slowly until you feel the lure digging on the bottom.  It should stay there.

If we get spill gates, shad flies and white jigs will be hot.  Fly fish using a white streamer or a small white jig or shad fly under a float six- to eight-feet deep.  Spoons will work, too.  Also try the bigger jerk baits (mentioned previously) in shad colors.

Our trout have been eating a lot of scuds.  When the lake water dropped out, some were stranded in pools of water off the lake.  Here's a video I shot with my iPhone of those scuds swimming around in the pool.

Drift a scud on the bottom anywhere from the dam down to Short Creek using a drift rig or carolina rig.  A cerise San Juan Worm is working pretty well, too.  You could use a tandem of the two flies, tying them about two feet apart.  Four-pound line is fine this time of year.