On an evening fishing trip on Lake Taneycomo, you may have swatted at a swarm of bugs over head, assuming they were mosquitoes.   But you were flailing at some of your best fishing buddies.   Midges -- not mosquitoes – swarm on Taneycomo and the trout you were targeting absolutely love those tiny bugs.  If you were fly fishing, their presence should have cued you to tie on a midge pattern.

Midges, or true flies, are part of the order Diptera.  The presence of a single pair of wings distinguishes true flies from other insects with “fly” in their name, such as dragonflies and mayflies.  Diptera is a large order, containing an estimated 240,000 species of mosquitoes, gnats and midges.  There are others, as well, but for now, those are the flies that interest fishermen. 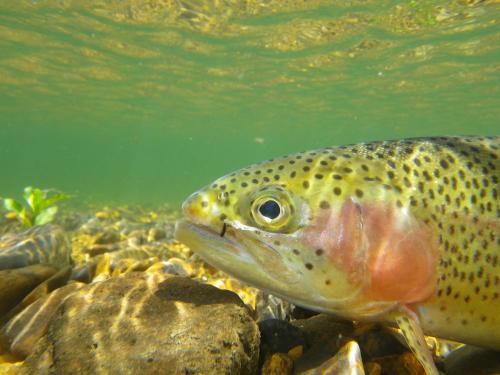 The most popular midge we fish here on Lake Taneycomo is the zebra midge.  It best imitates the midge in the stage where it’s rising in the water from the bottom to the surface to hatch. This is where it’s easiest to be taken by our hungry trout.  Just imagine a small pupa drifting slowly towards the surface.  All a rainbow has to do is cruise around just below the surface and eat.  They don’t have to chase them down, and, therefore, expend very little energy.  All we have to do is drop a zebra midge in front of them and they’ll take it, at least most of the time if they’re feeding.

There are literally dozens and dozens of types of midges. Their size and color differ widely, so you can imagine how many different midge patterns there are.  But I’ve found there are a few go-to patterns that work most of the time.  You can make them as simple or as complicated as you want.  I like simple, and I like to catch fish, so I stay with a few patterns and colors and do well enough to satisfy my fish catching addiction. 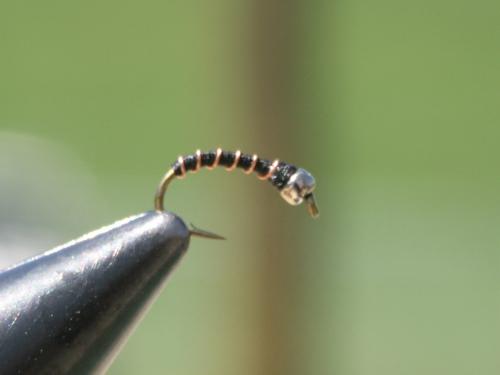 First, where do you look for rainbows feeding on midges?  Everywhere.  Midges can hatch on every square inch of Lake Taneycomo—any lake or stream for that matter.  The depth of water makes no difference.  Late afternoon and evening seem to be the best times to look for hatches, but again, they can hatch at all hours of the day, and night.  Clouds, wind, weather patterns and even generation all trigger hatches.

One of my favorite areas to look for midging trout is above Fall Creek in Taneycomo’s trophy area.  The water is not as deep, and I find this factor enhances my chance of catching fish, Plus there are more trout per cubic foot of water than other parts of the lower lake.  More trout means more competition for food and, therefore, more aggressive strikes.  The other area is out in front of my resort (Lilleys' Landing).  In the evenings, if they're not running too much water or if the water is off and not moving, I love to go out and fish the last 45 minutes of the day for midging rainbows.  If they are fallen leaves on the lake's surface, trout till hang under them and that's where I target them.

You can identify trout feeding on midges by their rises or dimples on the water’s surface.  There are three distinctive signs of varied “takes” displayed by trout when they feed.  “Tailing” is when you see only the trout’s tail rise out of the water.  He is feeding on pupa under the water’s surface.  “Midging” is where the nose of the trout just barely rises above the surface and takes a midge pupa that has attached itself on the underside film and is about ready to emerge into a fly.  The third is when trout chase and take a “dry” or a midge that has hatched and is on the surface drying its wings.  These trout make a splash, or at times, come all the way out of the water, their momentum thrusting them through the surface and into the air.

Any of these signs signal that trout are actively feeding and you should target them using a midge pattern.

For the purpose of this article, I’ll stay with identifying ways to present zebra midges, although there are other types of midge patterns such as thread midges, soft hackles, emergers, brassies and many others.

Zebras are almost always fished under an indicator, suspended under the surface at varied depths.  Depth is dictated by where the trout are “cruising” since you want to put it right in front of their faces. 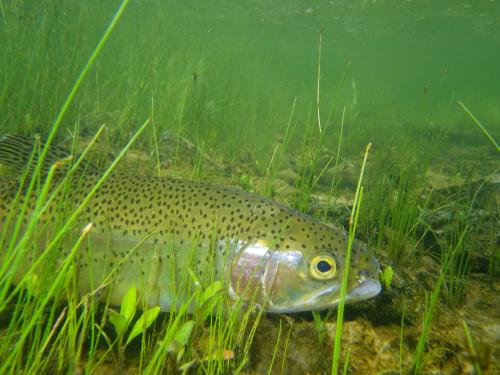 I tend to like to aim at feeding trout.  I see a rise and throw at it.  It’s really a lot of fun for us fly casters.  Having to cast both long and short casts, landing the fly within a foot from where you last saw a rise is challenging and good practice for accuracy.  The reward is a nice rainbow on the end of your line.

I use a small palsa float or something that is small and light enough to go under if the fly is taken ever so slightly.  This also helps when I’m fishing in very shallow water and I don’t want to spook a school of trout when they’re feeding.  I also use a long leader for the same reason.

We present a zebra midge in deeper water as well. This is where we get creative . . .   Tandem rigs using a zebra along with a scud, egg, a san juan worm or even a micro jig can be very productive.   The depth depends on the depth of water as well as where you think trout are holding in the column.  If you’re using a scud as a second fly, it should be the bottom fly. Fish it close, if not on the bottom, with the zebra tied about 18 inches from the scud.

If there’s a fly pattern that’s foolproof, this is it.  Fishing a zebra midge on Taneycomo is by far one of the best ways to catch big numbers and big trout on our lake.