Feel a little funny about making a Truman Lake report, but we went so here it is and maybe a little bit of very uneducated information. 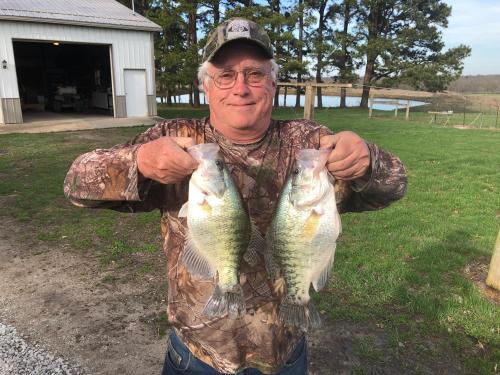 This is kind of a story in the works and I blame it all on the interweb as it got me going this Winter with nothing to do but sit here and spend money I don't have.  Started watching Spider rigging videos and I got HOOKED.  Was kind of hooked from last year seeing them  work on Lake O. during turkey season, but  the videos were the last straw.   I got with Ed. of Southern Crappie Rods and fanangled a guide price deal and he set me up with 8, 14' Southern Crappie Rods.  I also bought a dual front chair system and a Drift Master trolling set up and mounted it all on my 23' Alweld.  Of course then I had to try it out.  Side note, we only used 2 rods each so 4 was the max we used around the trees.

Been reading all the Truman reports on the web and most have been crazy good so a few phone calls and some great folks on here got me and my buddy Mark on our way.

Quick note there were no minnows available in Warsaw yesterday, but we were smart and I brought 8 dozen from Lilleys, which reminds me, I need to have them put on my bill

On with the report, we hit Bucksaw at 8:30 and were about number 15 in  line to launch.  No problem as these people actually know how to launch and pull boats out.  4 rigs can launch at once and it is like a well oiled machine.  When we pulled out a 3:30 Mark said there were over 100 rigs in the parking lot.  We saw boats of every age and price you can imagine.  One current theme was it didn't mater your boat cost or how old it is.  99% of the boats had PanOptics.  We saw rigs including the pickup that cost less than their electronics  These crappie fishermen are CRAZY about Livescope. and a 126 SV

After the tips I received we went up and started at Pretty Bob Creek.  I will tell you, the creeks from Jackson up to 13 hwy are totally full of fishermen.  Seems like most of these folks are either Dipping trees or Spider rigging.  We did not see a person make a cast all day and we at first were covered up with fishermen.  One thing I was not familiar with was how close these folks will fish to you.  We were even slightly bumped once as a guy went by us with his trolling motor in a narrow channel between trees.  Huge lake but everyone concentration on the major creeks.and there were lots of folks.  At one point there were over 20 boats in Bob and the next big branch up on the right.

We caught a total of 37 crappie 5 whites and 1 channel cat fish.  We caught everything rigging using either a Capps and Coleman or a Kentucky rig.  Never lost a hook in all those trees, unbelievable. 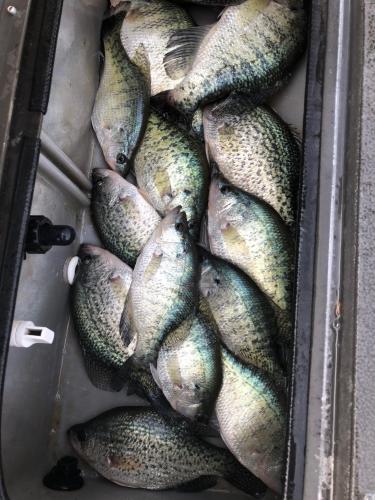 We had decided to keep only crappie between 12" and 16" so that's what we did, could have had two limits, but there is not enough meat on a 9" crappie for me to mess with.  We kept 14 crappie and had just a scouche over 6 lbs. of fillets which we thought was super for a couple of dummies. We had 5 females and 9 male keepers.    Big Caveat and no" PanOptics."

The Lowrance HDS7 told me they were hanging in the 10' to 15' depth range over 18' to 20' so we used that old worn out machine to find our crappie, and did OK.  Didn't see them snap at it but saw the rod tip dip or quiver and that was fine.

We could not catch a fish on a soft plastic.  Caught them all on double minnow rigs.  Caught 2 of the white bass on soft plastic

The Dippers/Dabber fishermen were interesting, they would scan the millions of trees and pull up and dab a jig or minnow on a rod that was 11' to 14' and watch the scope.  Talked to one of these guys at long range.  His mount put the 126 SV screen just below his chin.  I'm guessing the mount was at least 5'.  He said every tree in Truman in the last 10 weeks had been dipped.  Said he could catch one here and one there but the majority ran from the bait like a chicken with its tail feathers on fire.  He said in January at times you could catch a limit out of one tree.  Now it was one or two no matter how many were down there.  They were totally gun shy.

We noticed that the smaller pockets, like maybe only 100 yrds. long were not being hit so we gave them a try and right off we started catching.   We caught the majority of our fish out of 3 of these small pockets .  If I were to go back I would concentrate on these small pockets only.  They need to have at least 20/25 ft. of water however to make them work.  Fish are pretty much suspended over the deepest part either on a tree or just suspended in the channel.

The Lake reminds be of Bull Shoals only its very muddy.  Still fantastic vistas and no houses to be seen .  Surface temp was 56 in the small cuts.  Creeks and big lake 51 degree.  Just about zero visibility, looked like you were lowering your bait into plowed ground.  I heard a guide say the crappie like it muddier the better and he was right.