Crazy end to what started out as an awesome day

Floated my favorite stretch of Big River Saturday with another local river rat whose wife is a long time co-worker of Jennifer's.  Justin and I had been trying to get a trip together for quite some time but never could get our schedules to align.  We were finally able to make it happen and were both looking forward to the trip.

We got to the put in at daylight; only to discover that someone was already in front of us.  We fished through the first quarter mile or so with only a couple of topwater blow ups.  The river was it's usual clear for this stretch and was actually a little lower than normal for this time of the year.

By the end of the first real hole we had caught the young couple who had put in before us and passed them.  Now we had the water to ourselves.  In the next hole, the day started to improve as we each landed our first keepers of the day.  As we continued down river the clouds were building to the west and soon you could occasionally hear the distant rumble of thunder.  Around 10:30 the rain had finally caught up with us and as luck would have it, we were in a hole with a bridge.  We paddled down to the bridge and took refuge under it for the next hour.  Around 11:30 the rain had subsided enough that we put on the rain jackets and pushed back out to finish the trip.  We had lost about a foot of visibility but the river was still fishable and we continued to catch fish through the next good hole below.  However, as we floated into that hole, the rain returned and this time was much like the rain that Forrest encountered in Vietnam.  There was stinging rain, big o'l fat rain, and even rain straight up from underneath.  As we neared the end of that hole, a pretty significant run off was dumping muddy water into the river thus cutting our visibility down to less than a foot.  We decided to paddle through the next couple of holes in an attempt to get ahead of the mud and maybe salvage at least part of the second half of the float.  As we paddled through the next big hole, which is a local swimming hole, the water visibility was down to less than six inches and we pretty much conceded the day.  In the next hole down, the first of several intermittent creeks which had a flow strong enough that one could've floated them with minimal difficulty entered the river.  Upon seeing this, we realized that this was probably not the best conditions to be on the river in and began to make a more concerted effort to paddle towards the weigh in.  Each creek entering the river as we paddled toward the take out brought it's level a little higher and it's flow a little heavier.  As we passed two of the more noticeable landmarks on this stretch, both were completely submerged and barely even breaking the water which lead us to conclude that the river had come up at least 3-4 feet.  Another noticeable sign that the river was way high was that you could see out in several fields that you can't when the river is at a normal level.

We covered that last couple of miles of the float in a little over 30 minutes and when we reached the take out the river was running about 2 feet over the road.  Though the day had a rather abrupt ending we managed to catch 11 keepers; most of them being largemouths and each of us boated one over 18 inches.  While we never felt threatened or unsafe because of the river conditions, I have a new appreciation for just how fast a small stream's personality can change and how quickly one can find themselves in a dangerous situation.

First pic is of Justin with a 19 incher 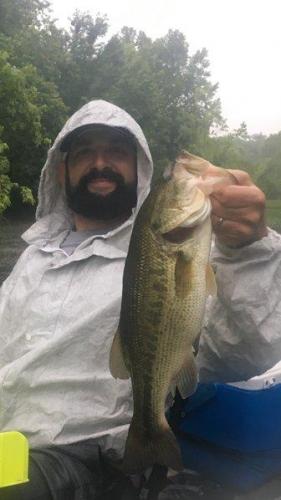 Me with an 18 1/2 incher.  Repped the sleeveless shirt in honor of my good friend Joe D. and his adoration of my fishing wardrobe.........  and also because I knew that the opportunity of catching a "picture" fish through this stretch would be high. 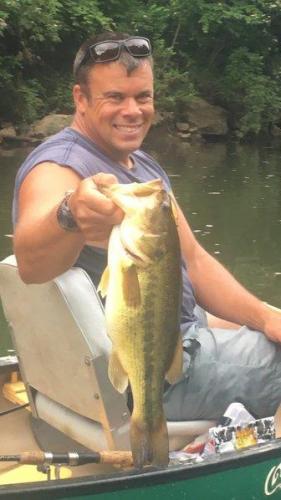 Pic of the river crossing at the take out.  I'm going to refrain from naming the access, but most that are familiar with Big River will recognize it right away.