Big Browns out to play

Didn't plan on even fishing yesterday, but when work called and said no work and then my neighbor called and said,"hey, you want to go fishing?" of course he didn't have to twist my arm to hard! lol  Not really sure why work called us off since Joplin and Neosho was sparred anything bad as far as snow or ice. So he calls me around 10:30 and we take off by 11:00. Temps started out 21 and by the time we left it was 19. Pretty cold to say the least. When we got there there was a light amount of snow coming down and it was really pretty outside. On the way there we kept seeing all kinds of ditches that were flowing hard so we didn't know what we were in for. Got down to the water and it was up a little, but with a real good flow to it. We were not disappointed. I started off with my olive jig and my neighbor started out throwing a rooster tail. I struck gold first after about 10 minutes. I could tell it was a nice brown just by the way it fought. When it finally came to the net I was stoked! Bad thing is I never got a pic of it.

I just bought a new camera and was messing around with it trying to get a pic and the fish flopped out of the net, spit out my jig and was gone. Well, that just plain sucked. A few minutes later I landed another brown. This one was only around 12" or so however. Then my neighbor stuck another brown, this one was about 16" to the tape. Just when we were about to leave the area he hooked into my fish! He brought to hand a 20" brown on the last cast! I say my fish because I am finding it hard to believe there were 2 in that area the same size. It could have been a different one, but who knows. This will make another year I have landed a 20"+ fish down on Capps. They are in there if you know where to find them and when to fish for them. 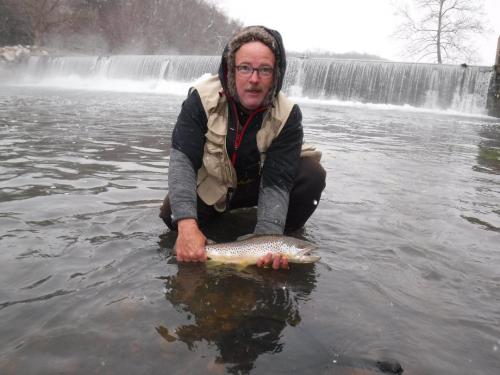