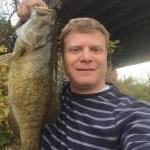 Bassmaster#1 and I went on our fall kayak over nighter this weekend.  Had Boiling Spring shuttle us up to Riddle Bridge early Saturday morning and it was tough fishing to start out, no topwater action and only a few bites by noon.  Then they started biting a little better.  Most of the smallmouth were average size with nothing over 13" except for a nice 17"er that I caught out of the end of a laydown that tangled me all up in the branches and I had to go pretty much cut the branches to get him out.  BM#1 wanted to fish in front of me after I caught that one so I cleaned up behind him by catching a really nice river largemouth that weighed 3lbs 10oz.  Biggest river Largemouth I've ever caught.  I  caught it on the next laydown that I caught the 17" smallmouth on and I was hugged up against the trunk of the laydown and I looked down in the water and saw it swimming towards where I had just cast my tube.  Dragged it over in front of him and he smashed it.  Was pretty cool watching him do that.  Caught most of our fish on tubes but some came on cranks some on a fluke.  HD craw caught some too.  I ended up with 22 fish to hand, with most being smallmouth and a few largemouth and goggle eyes mixed in.  BM#1 ended up with 20.

We posted up camp on a big sandbar that we had stayed on before and it had changed a lot, with most of the bushes that had once grown in the middle of the bar washed away by the past two floods.  Found a nice area just inside the tree line to put up the tent knowing that it was supposed to rain and storm.  And what a storm it was, and a leaky tent didn't help any.  Ended up not getting much sleep and was wet and cold when we woke up after moving the tent to a different area that didn't pool the water up under it.

Today we didn't fish much as we were cold and tired from being wet and not getting sleep.  I did end up getting 10 and he got 6 before we pulled into Boiling Springs.  It wasn't as good of a trip as we had 2 years ago on that same stretch were we hauled in over 100 fish between the two of us in 2 days, and even with the miserable night with the weather it was a good trip. 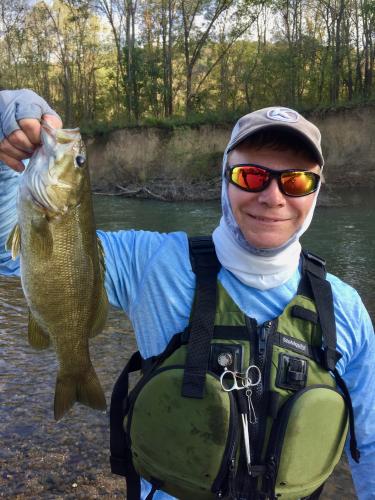