The second annual Andy Hart Memorial Fishing Trip was last week.  A group of 8 (4 dads and their sons) got on the river on Wednesday around 1:00PM at Alley Spring.  Our plan was originally to take out on Friday at Roberts Field and recreate a 2011 float that I took with my friend Andy who passed away suddenly a year and a half ago.  (I posted about that trip on this board as well back in 2011.)  Due to the spring flooding, Roberts Field was no longer an option forcing us to make the 31 mile journey to the Logyard.

We floated and fished all afternoon on Wednesday and had a great time.  The fish were biting steadily but only a few of any size.  We did most of our fishing from the canoe as the current pushed us along.  We camped that night on a gravel bar downstream from Eminence.  Unfortunately one of us forgot a tent in the car back at Harvey’s Alley Spring Canoe Rental but fortunately on Wednesday night the sky was clear and the moon was nowhere to be seen so the stars were out in force.

We stayed up a little later than necessary Wednesday night so Thursday morning came early.  Because we had cell reception I could see that a storm that had rocked Kansas City and a lot of western Missouri was headed our way.  Wanting to sleep more but knowing that we needed to pack up our gear before the rain started, we reluctantly began to break down camp.  The forecast for Thursday looked very wet…and it was.  Knowing that the day and night ahead looked to be rainy, we called Harveys to ask if they could deliver the tent that was left behind to Two Rivers.

It rained lightly but steadily all morning long and there was a great deal of fog on the river throughout the day giving my 9-year-old son reason to belt out the Deep Purple riff of duh-duh-duh, duh-duh-da-na, duh-duh-duh-dunt-da from “Smoke on the Water” (he is a drummer in a rock band).  I didn’t even know he had heard the song!  Again on Thursday the fishing bite was steady but one canoe dominated the fishing from beginning to end on this trip and unfortunately it was not my canoe.

As morning turned to afternoon we started to get an unexpected break in the weather and even some sunshine in the mid to late afternoon.   Harvey’s very graciously helped us out and met us at Two Rivers at 1:00 that afternoon to deliver the tent that was left behind.  But after Two Rivers the weather became increasingly favorable and we thought that we may have dodged a very big, wet bullet.  We continued to float and fish and have a few cold beers here and there.  We stopped to throw the Frisbee and play some catch with a water bouncer.  The sunshine (and those beers) helped to make us complacent about any urgency to set camp early even though the forecast in the morning indicated rain until well after dark.

When we got to Blue Spring we tied up the canoes at the riverside trailhead and walked up to see the beautiful, crystal-clear water – always a must see on this stretch of river.  Upon returning to our canoes we noticed that it was starting to look a little dark again.  Because it was getting late in the day, we discussed that we probably should have already made camp but we wanted to get past Blue Spring.  It was probably close to 7:15 by this time and we had not been able to look at any forecast since early that morning so we didn’t know what was about to hit us.

It quickly became very dark and then the skies opened up.  There was almost no wind and there was no lightning or thunder.  But the rain poured and poured hard!  Our group of 4 canoes paddled down river in close proximity and thoroughly enjoyed the soaking we received.  We laughed and shrugged it off as we paddled our way through the rain.  It was coming down so hard that the canoes quickly began to take on water.  As we started to discuss a need to stop to empty the canoes of water, the rain finally began to relent.  We continued to make our way down river while looking for a good gravel bar on which to camp.  As the rains came to a stop, we found a great spot around 8:15 or so, just in time to set up camp before dark.  We then made a late dinner and even managed a meager fire to stare at for a couple of hours.

Fortunately we had no more rain for the rest of the night and everything seemed to work out for us just right.  We discussed that our friend Andy was messing with us and taking care of us on this trip to remember him.  We spoke of him often and laughed at his expense just as we would have done had he been there with us physically.  We lamented his passing and drank to his memory.  It was what he would have wanted.  It was perfect.

We were able to get a little more sleep on Friday morning and have a more leisurely breakfast and camp break.  We were back on the water again on Friday morning heading toward the Logyard.  Friday was a beautiful day that was partly cloudy and comfortable all day.  Again, it was more of the same.  Steady fishing for one canoe with occasional fish for the other 3.  As Friday wore on our peaceful river was more frequently being interrupted by the sound and the wake of the jetboats that flew by us and our trip was coming to an end.

Great trip!  Great Kids!  Great friends!  Great fun!  I can’t wait until the next one! 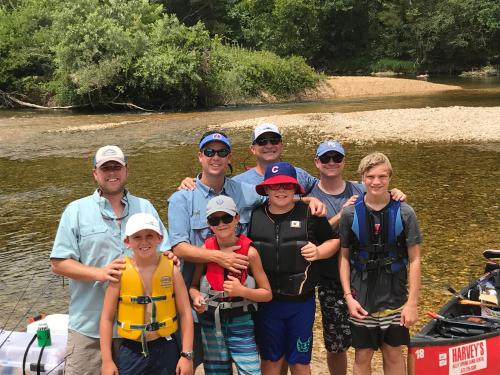 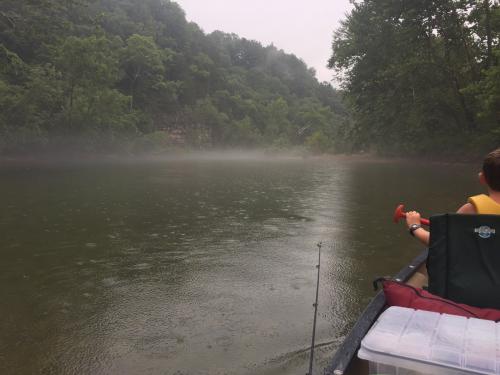 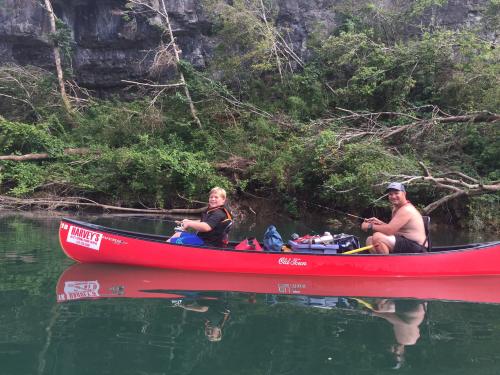 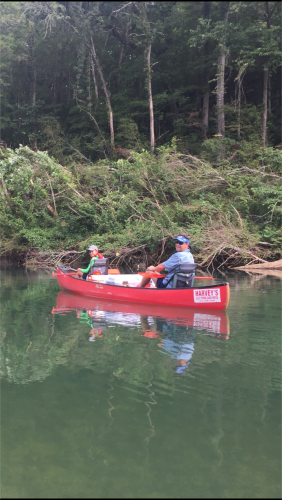 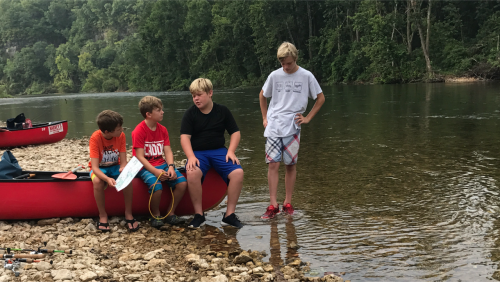