A Fordland man may have landed a new Missouri record stripper, he reported on the Ozarkanglers.com forum this weekend.

James Cunningham and his brothers knew there were big stripers below Powersite Dam on upper Bull Shoals Lake, he said. They had caught them before, traveling to the fishing spot several times this summer. Some had weighed up to 40 pounds, and even on Friday night that he hooked the lunker, they had two fish weighing more than 40 pounds already in the boat.

They were casting and retreiving big swim baits, knowing that the stripers eat mainly trout this time of year. The trout school up near Powersite Dam because the water flowing from Lake Taneycomo is colder than the rest of the lake.

It was about 1 a.m. early Saturday morning when the huge striper took the bait. Cunningham said it took him about 20 minutes to land her. After it tipped the scale in their boat at more than 60 pounds, the brothers scrambled to find a way to keep it fresh, knowing it couldn't be officially weighed until regular hours at the Shepherd of the Hills Hatchery in Branson. Since they didn't have a live well large enough for the whopper (not many fishermen do), they wetted and wrapped the big striper in rags and clothes to keep it from losing water weight. 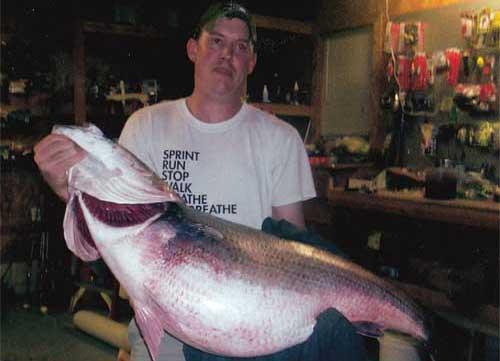 The official weight at thte hatchery was 60.55 pounds. It was 47 inches long and it's girth was 37 inches. James is now awaiting the official announcement from the Missouri Department of Conservation that it is a new state record.