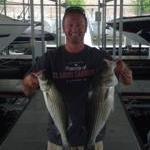 Yesterday I revisited the same stretch of the Meramec I floated last October and wrote about here:

It was particularly interesting to float the same stretch under slightly different conditions. In October, visibility was about 7 feet, flow was about 310 cfs, nearest gage height was about 3.3 feet, and water temps were 56-60. Yesterday, visibility was about 4 feet, flow was 1100 cfs, nearest gage height was 3.7 feet, and water temps were 58-62. The higher flow rate made it more difficult to hold my kayak in spots I wanted to fish more thoroughly, and even though gage height was only about 6 inches higher it seemed like it was more than that. Sandbars that I saw in October were under enough water to float over.

The numbers were about the same - 8 smallies, 12 spots, 3 goggle eye, and a flathead. The flathead really surprised me... I was throwing the large HD craw in about 8 fow when it got thumped.  At first I thought it was a drum and I could tell it was big.  It held tight to the bottom, but when I finally got it up to the surface I had an 'oh s**t' moment.  It was way bigger than my net and I was struggling to keep the kayak from drifting into some sweepers, so I dragged it over to shore. Got out of the yak, grabbed the beast by the jaw, got it unhooked and it started going crazy on me and got loose before I could get a picture. It was easily north of 30 inches and 15 lbs.

I found a nice rootwad that produced about half of the fish for the whole day, but they were all under 12 inches in that spot.  Despite the small sizes, it was blast to get bit on almost every cast for about 15 minutes. Vast majority of fish came on PBJ ned, and the top prize was an 18" beauty on a squarebill. 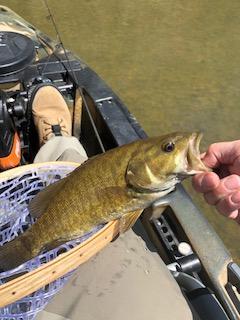 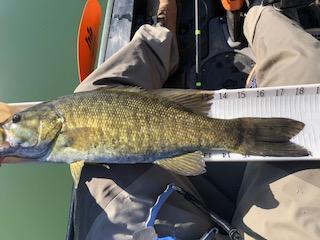