I have written fishing reports on the internet for Lake Taneycomo for the past 25 years . . .   but this report feels very eerie.  Why?  Because I'm not really writing for anyone who's coming to fish the lake anytime soon.  For that reason, I have to write it coming from a different perspective.  May be it will look the same. . . I don't know. 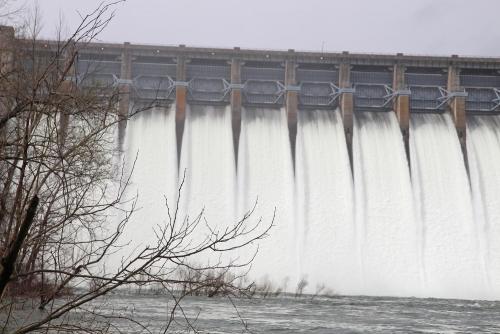 The whole White River basin received a big rain on Friday, one that was not forecast.  Most of the area received four inches of rain while some netted six inches or more.  Beaver Lake jumped up past its flood pool of 1,130 feet so officials have been dumping more than 16,000 cubic feet of water per second since Saturday morning.  That lake is now below 1,129 feet, falling fairly rapidly.  But this, in turn, is adding to Table Rock Lake.  Last time this happened, officials cut back on the release when Beaver hit the 1,128.5 feet mark which will be today.  We'll see what they do. 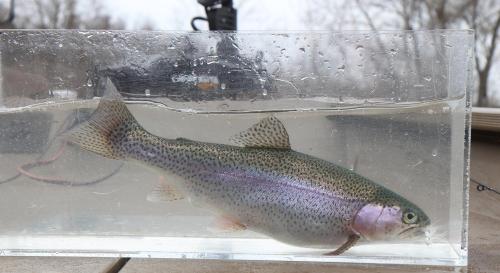 Table Rock has come up over six feet since Friday and is still rising about four inches a day.  Dam operators are running 20,000 cubic feet of water per second through Table Rock Dam presently and will continue for at least a week.  This is while the weathermen are forecasting more rain this week -- up to two inches in some places.  Table Rock's level is up over 923 feet.

I think our flood gates at Table Rock Dam have been opened more in the past year than any other year in its history.  Now I don't have statistics to back that up, but since they were open quite a lot in October through December and then again in February and now March, I'd say I'm safe with that assumption.  Besides a good run last March and a few here and there  other times, we've haven't seen threadfin shad coming over the top.  Not until this week.

Starting Tuesday of last week, shad started pouring over the spill gates in Lake Taneycomo, delighting those fishing that day.  But the shad continued into Wednesday, and Thursday, and our trout quickly stomached their fill of shad flies and white jigs.  Fishing got tough, at times.  But then we started to see periods of no shad and the bite started again. 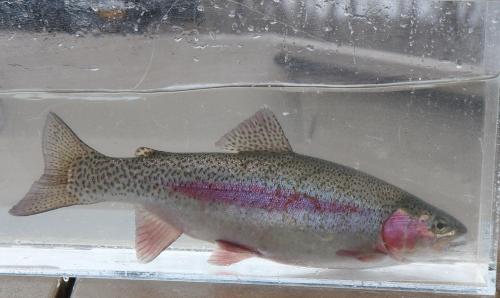 This past weekend, the bite was on most of the time, although in the middle of the day it slowed down.  It could have been because of the influx of boat traffic up close to the dam.  Sometimes that drives the fish down, and they don't bite.  But still, most people were catching big, fat rainbows and loving it.

When it slowed, the trick was to keep the white 1/8th-ounce jig or the shad fly on the bottom where the fish were holding.  During feeding times, it seemed like you didn't have to do anything special except drop the jig or fly into the lake. 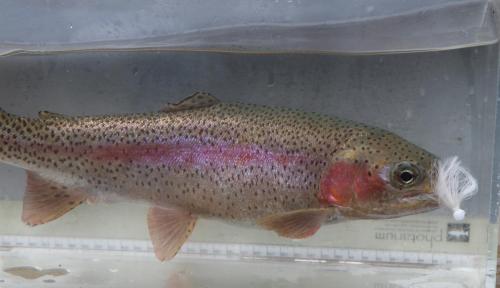 So just about anything white was hot.   We're using white jigs and white shad flies but then we're using combination of colors with white and something else like blue, gray, olive or pink.  We're also dragging small stick baits on the bottom, too.  They're not hitting scuds or San Juan worms anymore -- not right now and I really not sure why.  Usually the San Juan does well in high water after a big rain.

There was so many shad that came over the dam that Blake Wilson from our staff saw some all the way down at the lower dam on Taneycomo -- Powersite Dam.  They'd drifted all 22 miles of the lake.  Since fish throughout the lake were fed some threadfins this week, there's nothing wrong with throwing that white jig throughout the lake, not just in the trophy area.

We're pulling the boat up in slack water different places and working the white jig in both the seam, where the fast and slow water meet, and in the slower, eddy water and doing very well.  Here's a One Cast video where I did just that.

Captain Rick Lisek had his clients drift shad flies from the mouth of Fall Creek down to Trout Hollow on Sunday, catching their limits of nice rainbows.  That's not surprising at all knowing our trout have seen these shad throughout the lake now.

Nathan Bolerjack of our staff fished with me Monday and, while doing One Cast, took some pictures of rainbows we caught using my Photarium, a plexi-glass tank made for holding and photographing fish in.  Although the catching was slow, we managed a few pretty rainbows to photograph.  I've sprinkled the report with the pics. 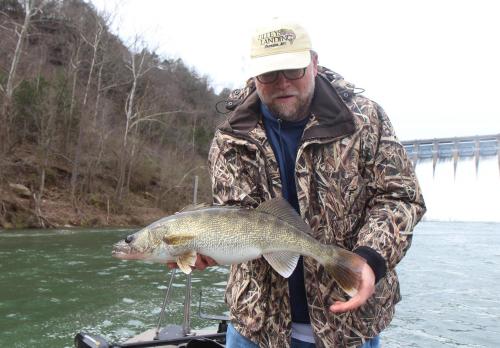 And here's a walleye we float alive but floating below the dam.  Took a pic and put her back.  She swam away - hopefully it survived the 200 foot fall... it was pretty shook up.