After a high water event a couple of weeks ago and some favorable reports of redhorse in the confluence with the Osage, we headed back down for another shot at the spring sucker run. What a difference a couple of weeks and no deluges in the recent past make on the water conditions. 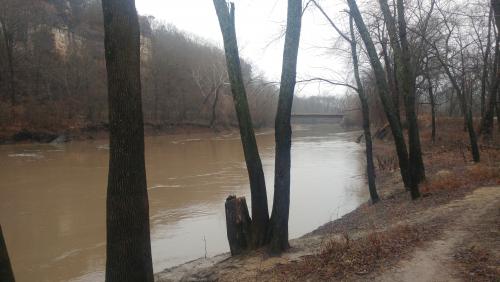 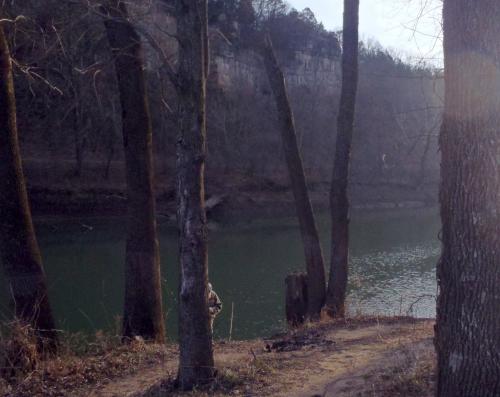 We fished the bottom using a jury rigged three way. Tied a 5/8 oz or 1 oz bell sinker to the terminal end of the line and made a loop about 12 to 16 " above the sinker with an overhand knot. passed the loop end through the hole and over the bottom of a no. 4 or 6 baitholder hook so that the line cinches below the eye hole of the hook. Put on a nightcrawler and cast out into the current. Then sit or stand and wait. Today it didn't take long. I was fishing the point and put one of my baits on the river side of the seam between the creek incurrent water into the Osage and the other was right into that seam. About five minutes I have a strike on the river bait, It taps again and I set the hook. Fish on! I brought in a 10" channel catfish. After missing that sturgeon on the last trip fishing in this same spot, it was good to have a solid hook set and a landed fish even if it was a small catfish. After ten minutes I repositioned the bait from the seam and cast into the creek current. My buddy Jon just picked up and set the hooked on his first fish, a decent bluegill. Then my creek line got hit pretty hard and the hook set was solid. I pulled in my first nice bluegill of the day. 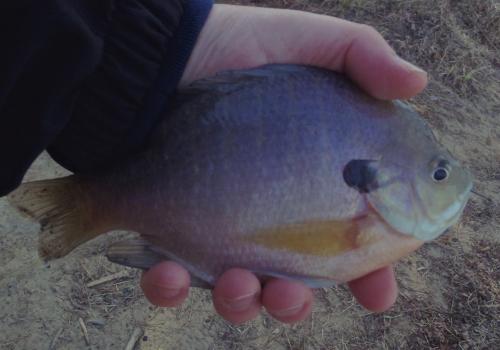 My buddy caught a couple more bluegill and then he reeled in the first golden redhorse sucker of the day. 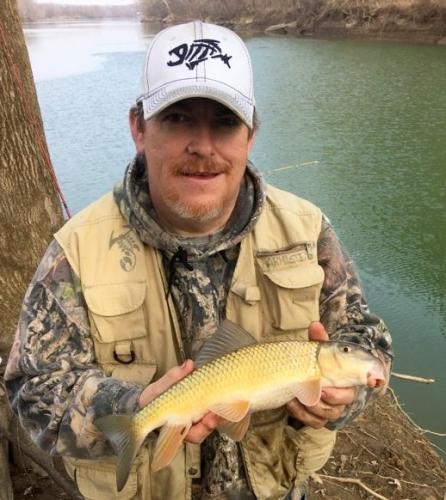 I had caught a couple more bluegill but was only getting bit by fishing the creek and not the river side. By the time Jon reeled in his second sucker, I moved to fish upstream of him on the creek. I was casting across the creek towards a large laydown tree on the far bank. It was a blessing and a curse. I was getting bit on all of my lines, but I was in a large school of bluegill. at one time I caught a bluegill on the left line, as I was reeling that in the middle line was getting tapped. I caught that fish and as soon as I landed it I said to the right line when were you going to catch a fish. As soon as I made that statement, the rod tip bounced heavily and I set the hook on yet another 7-8 inch bluegill. Got to love calling the shot

! Just wish that it was a redhorse. With one of my lines I made a shorter cast into what might have been the channel and hopefully away from the bluegill. The line looked to be drifting and I began to reel it in when I felt the fish and set the hook. Jon had mentioned that the suckers were biting lightly, just a movement of the line. Well now I had my first redhorse on the line

! Not a giant golden redhorse, but it was the targeted species for the day. 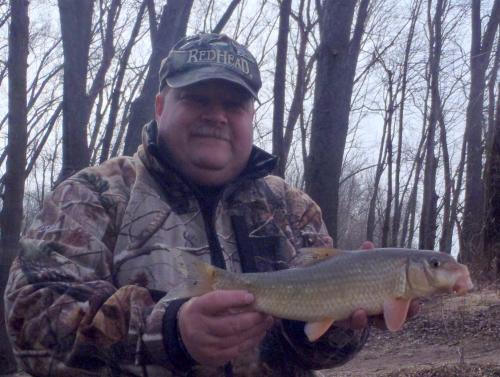 I didn't catch another one, but did manage a few more bluegill (ended up with 10 bluegill on the day). As the action slowed, Jon had another weird bite, just like a steady pull. He set the hook and pulled in a very cool catch, a mudpuppy salamander. It was about 9 to 10 inches long with prominent gills. At first thought it might be a young hellbender, but later determined it was too big for a hellbender to still have gills. I just hope that we didn't damage it too much and it survived the encounter. These guys like the hellbender are getting pretty rare. 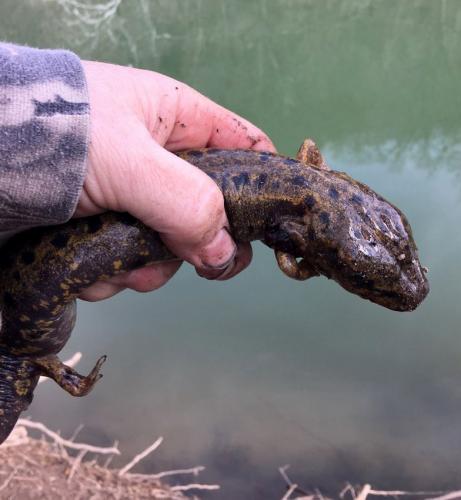 We headed upstream and Jon found a honey hole of hungry fish. He landed a blue catfish, channel catfish, a couple more bluegill, and a spotted bass (I got jealous of that one). 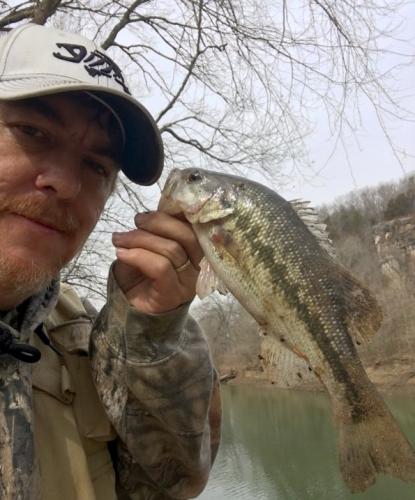 Jon's dad showed up around 10 am and he caught three suckers and a few nice bluegill as well. It was a great day. What a difference from our last trip!