The fishing was good; it was the catching that was bad.
-A.K. Best

The fourth Andy Hart Memorial fishing trip took place last week (7/10/19 – 7/13/19) on the Current River.  It was the 13th annual trip overall.  Two father/son pairs from Tulsa and one father son pair from Kansas City set out early Wednesday morning to fish, float, and remember our dear friend.  Most things about this trip seemed to be much more routine than past trips.  I think the fact that this is the third year since it has become primarily a father/son trip and the third year that we set out for the Current River system (last 2 years began on the Jack’s Fork) just made it all seem a little easier to prepare for and to know what to expect.  Nevertheless, there is always plenty of excitement and anticipation towards such a great few days of fun, fishing and relaxation.

For this year’s excursion, we decided to go back to the previous year’s plan of floating from Round Spring to Powder Mill.  Last year we made a last minute audible in favor of an Alley Spring entry due to the heavy rain in the forecast and the ability to stay in cabins on the river in Eminence.  After an uneventful drive to Round Spring, we began to load the canoes when the rain began - something that has been a recurring theme on this trip.  We paid the rain little attention as we readied the gear and the tackle.  We shoved off the river’s edge around 1:00pm in a steady rain.  Unfortunately, our first pair was so anxious to get on some fish that we did not get a traditional group photo with the entire group.

Fishing was slow that first afternoon and it was slowed significantly by the lightening and thunder that coaxed us into taking refuge on the riverbank with a small cave not more than a couple of miles from Round Spring.  As the storm slowly moved off, we continued down river.  Our collective rust was showing as we all spent far too much time retrieving lures out of trees and resolving line tangles.  One boat even suffered a broken rod tip – our departed friend Andy was truly with us!

Many men go fishing all of their lives without knowing that it is not fish they are after.
-Henry David Thoreau

I would like to take this opportunity to talk about the inspiration for this annual trip that I have been posting about for years now.  Andy Hart and I met in 1st grade.  We were 6-years-old and he was my best friend.

Living half a continent apart nor going to rival universities changed any of that (he moved to San Francisco after college at Mizzou).  We would still go through the elaborate handshake routine we made up in grade school every year when I picked him up from the airport for our annual fishing trip.  And no matter how badly he was out-fished, he was ready to plan the next trip as soon as the trip ended.  He never failed to call me on my birthday and he always had a way of making no conversation about him.

Andy gave me strength.   He made me feel bigger, stronger than I felt on my own. He was positive, popular, attractive, and he was my advocate.  He always had my best interest ahead of his own. He was my brother and I miss him terribly.

So, this fishing trip is one way that I remember and feel closer to him.  I have even created an “Andy Hart Spirit Award” given to the attendee that most exemplifies Andy on the river.  Some of the traits we look for in an AHSA winner are:

-Do not catch fish.  If you do, make sure they are small and after everyone else has caught plenty;

-Leave something important behind (could be a tent, food, fishing gear, anything really);

-Bonus points for tipping a canoe.

With all of that said, day one on the river this year looked more like a competition for the Andy Hart Spirit Award than a fishing competition which is the natural undercurrent of any trip like this.

The river was beautiful that afternoon with a thick fog setting in after the rain moved off.  At times it was hard to see a canoe only a hundred yards or so down river!  As evening crept in on us, fishing remained slow with only occasional small fish being reeled in.  We found a decent gravel bar to camp on despite few miles of progress down the river.  A fire was barely possible on this Wednesday night due to the soaking that afternoon and the continuous building of thick fog that made wearing a headlamp counter-productive.  We worked on keeping a fire alive through dinner and post-dinner conversation.  That night, while in the tent, you would think it was raining from the sounds of the dew collecting and dripping from any leaf around.

Morning came all too quickly with the sun beating through the tent and creating the feeling of a steam bath.  A cold can of coffee and a breakfast burrito got me moving and a slow camp breakdown commenced with the intent to let the morning sun dry out all of the wet gear.  By the time we were packed away for another day on the river, a nice soak in the cool river was absolutely necessary to cool us down.

Creeps and idiots cannot conceal themselves for long on a fishing trip.
-John Gierach

Day 2 was a noticeably better day of fishing as every canoe seemed to have shaken off the rust.  Gone were the repeated hang-ups and equipment problems.  Who would have guessed that the result of that improved performance were more fish?!  Everyone was catching fish on Thursday as we spent most of the day in the canoes fishing as we floated.

The solitude we enjoyed on Wednesday was not to last on this Thursday as jet boat after jet boat roared up and down the river (some repeatedly) many times sending us scurrying to keep our canoes afloat and dry.  On one occasion my canoe took a wave over the side of the boat as it was parked on a gravel bank.  At another point I was honestly frightened for the life of my son as a jet boat speeding down river took a route between him at the front of the canoe and shore that couldn’t have been more than 10 feet away.  The boat squeezed through the tight, shallow section of river putting their boat within a couple of feet from the front of our canoe at full speed.  Despite my inclination, I will save my additional rant over this instance and the subject of river jet boats for another time and place.

"Many of the most highly publicized events of my presidency are not nearly as memorable or significant in my life as fishing with my daddy."
- Jimmy Carter

We took few breaks on Thursday to stretch our legs before reaching Two Rivers where we took an extended break to add some more ice and water to our coolers.  Pressing on down river, the fishing remained steady but fish of significant size were not to be found.  We enjoyed nearly perfect summer river weather – warm to hot with light breezes and intermittent cloud cover – and ideal floating conditions.  Fishing was easy and consistent and the occasional shout of “ANDY!!” could be heard from any of the 3 canoes lazily gliding down the current.

As afternoon rolled into evening we began to keep our eyes peeled for a nice spot to camp.  The spot we chose had an abundance of firewood so night 2 allowed us to enjoy the roaring fire we missed out on the night before.  The clearer dryer night and the light show of the fire inspired us to say up a bit later on night 2 so we played dice, laughed at stories about Andy and enjoyed time with our friends and our sons.  Watching these boys grow up to be fine young men is like watching a flip book of the greatest story ever told – it goes too fast but it never disappoints.

Looking back at the previous AHM trip reports:

Day 3 was almost a replay of the previous day.  It is remarkable how familiar this routine has become; how similar our conditions have been both day to day and year to year.  Rain has repeatedly been a factor but never a burden (although we have had some close calls), weather and floating conditions have been good to great and we always catch plenty of fish.  After our standard routine of breakfast, camp breakdown, and reviving cool-water plunges, we were on the move once again, albeit with a nagging sense of dread that our annual trip was quickly heading to its all-too-quick ending.

Our anxious pair that left us early on day one did so again on day 3 not to be seen again until our take-out spot in the afternoon.  The other 2 canoes could not be in any hurry as our short time on the river on Friday resulted in a productive day of fishing.  We caught almost as many fish as the day before but again all of the fish were fairly small.  I believe the largest fish of the trip was only 14.5”.  Earlier than desired, we came upon the highway 106 bridge signaling our last stretch of river before our takeout spot across from Powder Mill.  However, our leading canoe had gone on down river to Blue Spring as the bank across from Blue Spring was our previous year’s take out spot.  Despite the miscommunication, the very helpful outfitters at Carr’s Canoe Rental (Billy Smith specifically) were very accommodating with our pick up and we soon had everyone retrieved and headed back towards Round Spring.  Billy was a wealth of knowledge about fishing the Current and other rivers as well and he provided plenty of good conversation on our ride back to our vehicles.

Throughout the trip, I tried many different lures and techniques.  For the first time I didn’t catch any fish on top-water lures despite frequently trying several different types and I caught only a couple on crankbaits.  The lure of choice was once again 3” soft plastics in a variety of colors. 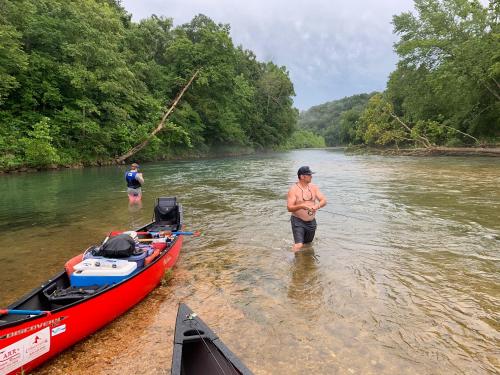 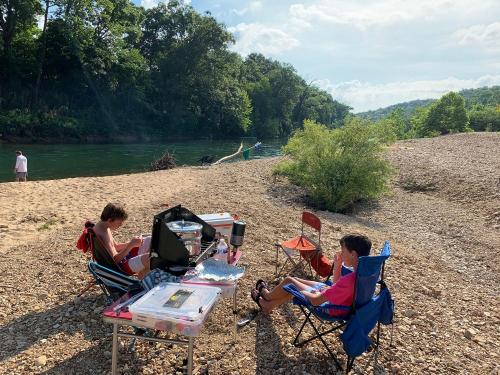 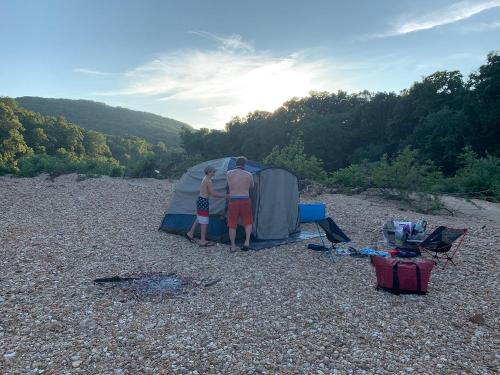 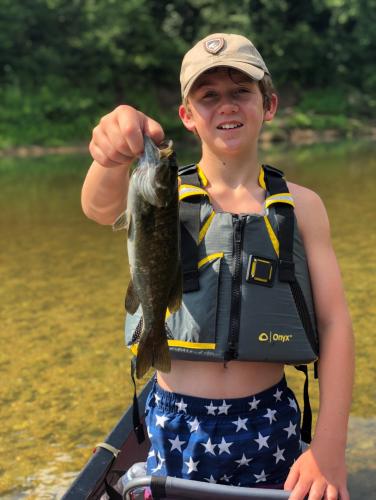 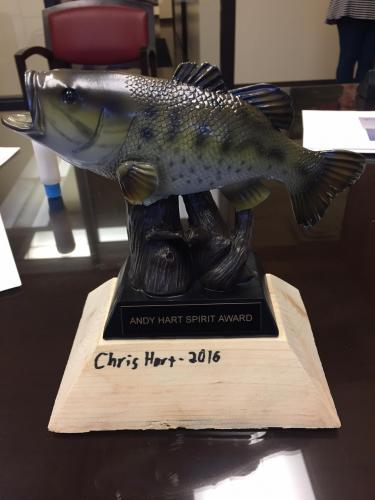 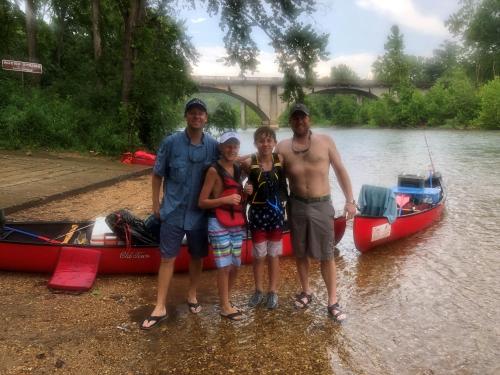 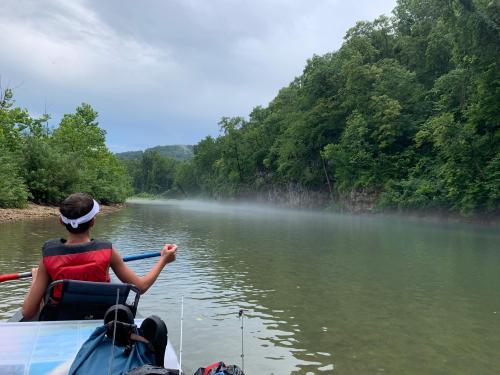 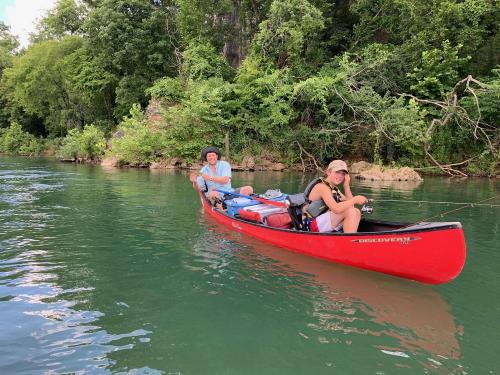