Let Me tell you a Fish Story

So my wife had been out of town. I’ve been trying to keep up with the house work and tend the plants and pets, but  I was trying to fish like I was single too.

So, I caught 112 fish yesterday. It was a hoot. My back hurt and I was tired so I ALMOST did not Fish today. As it was, I did a little extra clean up and didn’t leave the house until 0930.

Finally got the boat in the water around 10:00. First thing I ran into netboy and his wife on the water which was fun. They were catching them.

I was catching fish at a 20 Fish an hour clip, but water was really falling out and I decided to run up river. Still trying to learn.

I ran up to a big long shoal and the Fish were stacked in there. Zig Jig was too easy so I picked up my fly rod and proceeded to catch a dozen or so. Likely had 50 bites. Terribly inefficient.

I could have stayed there, but decided to run further up river. I found another shoal around the corner where a high spot makes two riffles.

I threw my 20 lb anchor out then jumped over the side. Swimsuit and water shoes is the way real men wade Fish the White River, During the summer anyway.

Well, when the day started, I knew I would have low water so I was only hoping for 50 Fish. I was already at 50 when I started at the last riffle I would fish for the day.

Snatched up my fly rod. I like to be frustrated. I caught the first fish while I was pulling line off the reel. Indicator disappeared so I lifted. Caught a total of 7 on the left. Shifted to the right side and caught 7 more. So now 100 isnt very far away.

Im starting to feel a little water logged so back in the boat I go and I start drifting the right side. It’s also stupid good, but fish are bigger.

Then it happened. In the deepest darkest water, solid thump. Massive fish shoots off upstream. Reel screaming. I pull start the motor and give chase. First glimpse, I thought it was a monster Rainbow, but it was a Super Tanker Brown.

It was a long fight. Minutes. I was sure I was going to lose it and took photos best I could of it swimming past the boat. I wanted something to show somebody.

It took a long time to get it close to the boat and It did not like the net at all. It powered off many times after it saw the net. I was sure I was going to lose it. 6 lb line (Nano) with 6 lb P Line CX Premium leader. Using a Barbless 1/16 oz Zig Jig that has aleady caught a lot of fish. I was sweating it.

But I caught it. I finally got in the big net. I got the jig out. Took a quick pic and transferred the fish to my measuring net. It barely fit. 28 inches long. Thick and Heavy.

The fish was All tuckered out. I spent a little while reviving it before it pulled out of my hand and swam away. Fish number 87 of the day.

It says a lot about me (both Good and Bad) that I stayed and caught more fish after that. I ran up and fished the left again and the right again. I finished with 108.

I really enjoyed myself today. 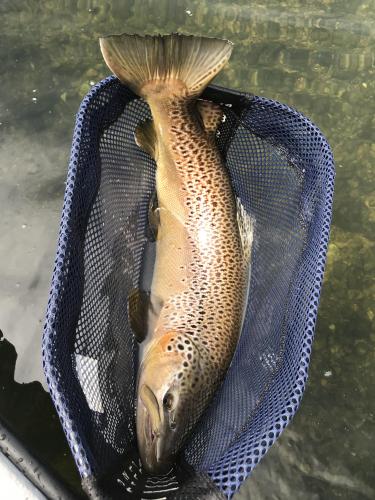