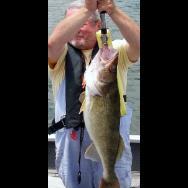 In 1919, Norman Rockwell painted two covers for successive issues of a magazine called The Country Gentleman. The images are now in the public domain. 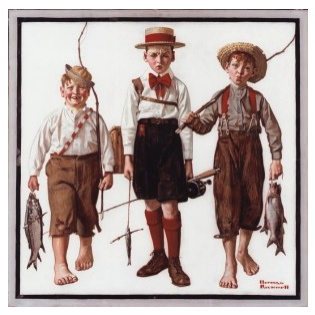 The Catch Even Norman Rockwell knew worms catch the fish. Why many people avoid using worms and insist on artificial baits would make an excellent topic for a psycho-social doctoral thesis. I won’t be writing that. Instead, this article is intended as a primer for fishing worm harnesses in Tablerock and the other White River impoundments. What I will share comes from fellow walleye fishermen who have showed me a number of tricks. In particular, I want to thank Chuck Etheredge of Holiday Island, Arkansas. Chuck holds the Holiday Island Marina walleye record at 14.5 pounds, and he is the one who taught me about his harnesses for brush fishing crawlers.

Nightcrawlers are one of nature’s perfect animals. They aerate the soil, they help break down leaves and other dead matter to soil, and they are so valuable to growing plants that people buy them to put in their gardens.

Brown trout guides below Bull Shoals dam say they use red worms because they are “more natural looking in the water.” The real reason is stocker rainbows that can’t and won’t leave the nightcrawlers alone.

In the last several years nightcrawlers have become a major farmed and/or harvested crop. Grocery stores, convenience stores, and even Walmarts sell them. Typically, the containers are Styrofoam or cardboard and are filled with potting soil or mulch. I buy at several locations and find the overall quality quite good. However, I always check the contents before I leave the store. Temperature or stock rotation disasters do happen.

Next important tip: As soon as you get home, place the worm boxes in the refrigerator and keep them there until the fishing trip. Crawlers will last several weeks if left alone in the bottom drawer of the refrigerator. If you are not the cook, label the boxes “worms” to avoid screams and other domestic difficulties.

On the day I intend to use the crawlers, I pack the boxes in an ice chest with ice. The ice will not freeze them in their containers and will keep them cool and lively. Once I am in the boat and ready to fish, I put some ice and lake water in a flat bottom plastic bowl and add four or five crawlers. The ice water plumps them up and washes the dirt off so your boat floor stays cleaner. In addition, you will be in and out of your cooler less often. When the ice melts, merely add another piece or two.

An alternative I recently learned was to bathe a day’s worth of crawlers at once, then place them in the now empty Styrofoam containers with ice.

In the event you wish to buy crawlers in bulk, they are available from several mail order sources, including Cabelas. Several chapters of the classic book, Lunkers Love Nightcrawlers, cover the long term care and feeding of nightcrawlers.

A worm harness is nothing more than one or more hooks combined with one or more devices to attract fish. The early Crème worm was a rubber worm on a primitive worm harness. I caught my first lunker bass on this rig. 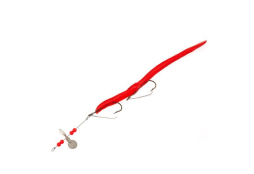 Literally hundreds of commercial harness makers exist and a Ebay search for worm harness or crawler harness will prove it. Cabelas and Bass Pro each carry more than one brand and several varieties for each brand. The sheer number intimidates anglers seeking to try a new method. How can you know which ones work best?

For those wanting instant gratification, the “norm” consists of two small hooks, size 2, 4, or 6, snelled on 10 to 20 pound test line. Above the hooks, you will find 3 to 8 beads, and in front of that a size 3 Colorado or Indiana blade. The entire harness will run on a single three to four foot strand of line with a swivel or loop at the end opposite the hooks.

Variations abound including those with single hooks; Smile, Dakota, or Willow blades; and even what appears to be a wedding band in the build. 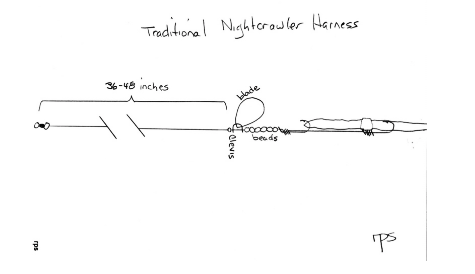 To help understand the reason for blade choices I’ve built a chart:

A variety of harness colors will work. I suppose you could catch a walleye on anything if you fished long enough with a crawler attached. However, the purpose of the harness is to attract the walleye to find the worm. Certain colors and styles tend to work more consistently.

As a side note, the common forage of walleyes in our chain of lakes explains the color choices. Walleye in the White River chain primarily feed on shad and bluegill. As yellow perch, common walleye forage in the North, become more prolific in Bull Shoals, the color choices for that lake may change somewhat.

Bodies with chartreuse, red, green, orange, pink, and white are the most commonly used. I own a box of plastic beads I bought from Cabelas for tying traditional harnesses. It contains no less than 24 different shades that are variations on all of the above except white. Traditional harnesses frequently use more than one of these colors.

Common blade colors include silver, copper, and air brushed or painted blades using the color palate listed above. While I have had some success with half silver/half gold blades, harnesses with solid gold blades have never proven successful for me. Again, the yellow perch in Bull Shoals may change that. 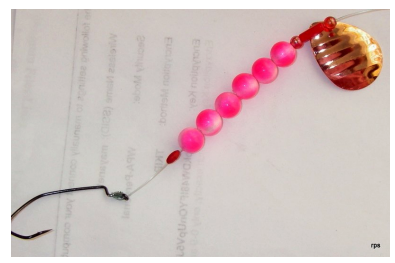 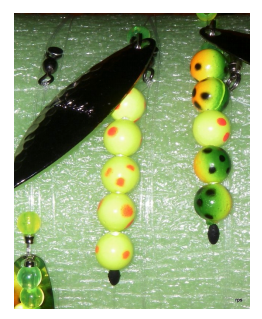 In a previous article, Trolling for Table Rock Walleye, I wrote extensively about where and how to locate walleye. I urge you to read or re-read that article for location information.

Depth and speed are the other variables that combine with location to determine whether you have success. Fishermen successfully use harnesses for fish holding as shallow as 6 or 8 feet. The harnesses are equally successful on the Great Lakes at 45 feet behind downriggers. For the White River lakes I do not advise downriggers. Instead, those who target walleyes use three way rigs or bottom bouncers.

A three way rig utilizes a three way swivel. The main line attaches to one ring, 12 to 24 inches of line with a bell sinker at the end attaches to the second ring. The third ring holds the harness line.

The alternative to a three way rig is a bottom bouncer.

Bottom bouncers come in a variety of weights, ranging from ½ ounce to 4 ounces. What size to use? Traditionalists will tell you to use 1 ounce for every 10 feet of depth you will be fishing. That advice is accurate and useful under normal circumstances, especially when combined with the traditional advice on speed and how much line should be out.

If you search the internet for articles on using harnesses and bottom bouncers, almost all will tell you the ideal configuration will have the main line running from the boat to the bouncer at a 45 degrees or less. Those articles also suggest the bouncer should only “bounce” from time to time. These articles are absolutely correct, and professional walleye fishermen use these “rules of thumb” every tournament.

The last element of traditional harness fishing is the speed. Most days a speed of .8 mph to 1.4 mph will be the most effective. Be aware the type of blade can change the effective speed. A Willow spins far more easily than a Colorado. A Smile blade can spin with even less speed. You should go at least fast enough to spin the blade.

However, the ultimate decision maker on speed will be the fish. Sluggish fish may want a slow presentation. If so the weight will be less and the blade choice would be a Smile or Willow. On other days, hot water fish may need a fast speed to trigger bites. In that case a heavier weight and more line may be needed to reach the depth desired.

Careful readers may have noticed the pictures of my harnesses above are different from what they see in stores or some of the sketches I have drawn and inserted. The differences are only a part of the “secret” method Chuck Etheredge taught me two years ago. His method is an adaptation of the traditional ways; one that is designed for the highland reservoirs with submerged timber, brush, stumps, car size rocks, and house foundations.

Chuck wanted a harness that was less likely to sink when the bottom bouncer stalled because it hit a rock or limb. To that end he substituted floats for the glass or plastic beads. If you put one of his rigs in the water and lay the bouncer on the bottom, the blade slides down to the weight, but the floats, hook, and worm stay up.

He also experimented to see if he could avoid exposed hooks. He took from the bass fishermen the idea of Texas rigging the worm. Yes, it is a soft, real nightcrawler, but the embedded hook had to help a little. In addition, one hook point instead of two equaled half as many hang points. He found a worm hook in size 1 or 1/0 was every bit as good as the traditional two small hooks in sticking fish.

Last, to keep the float beads and blade from pushing the worm down into a wad, he made another innovation. He uses a bobber stop to hold the beads in place.

In addition to changing the harness, Chuck defies conventional wisdom as to bottom bouncer weight. He intentionally uses about half the weight considered standard. At 20 feet he will use one ounce. At thirty feet he will have on a 1.5 or 2 ounce bouncer. To reach the bottom, this means he must have out considerably more line. The change in angle between the boat and the bait is exactly the reason for his unorthodoxy. He believes the “flatter” angle aids in pulling the rig up and over limbs and logs. 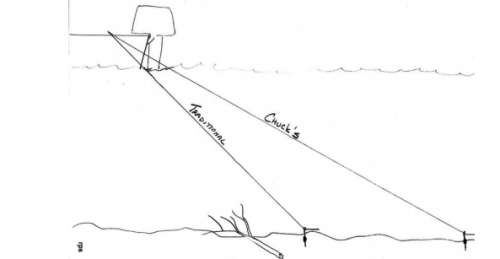 The combination of differences works for Chuck. On more than occasion I have watched him fish snag filled flats and timbered channel edges with his worm harnesses. Yes he will sometimes hang up, but far less often than anyone would expect. And while he is at it, he catches fish.

The first time he showed me his ways, he tried to explain his uncanny success at staying free from hangs. In my words, he does it like this. When he feels the line begin to rub over a limb, he does not jerk. He waits until the line between the limb and harness shortens. As this happens, braid line will sing or vibrate. Quite often the rod tip will feel heavier. Just when he feels the bouncer arm contact the limb, he lifts the rod in a high arc to pop the rig and harness over the limb. He then lets the bouncer fall back to the bottom. Many bites happen on that drop.

Please note that Chuck’s method requires the angler to hold the rod and feel for the key moment. This is different from those who put the harness rod in a holder.

Every article about a fishing method should include a few pictures to vouch for the method and the author. 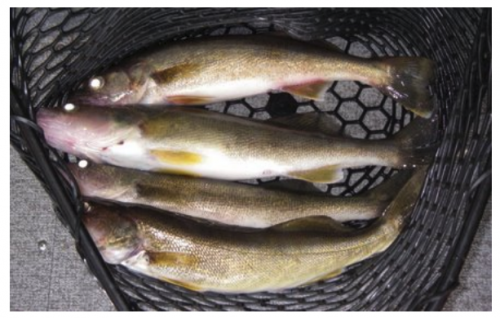 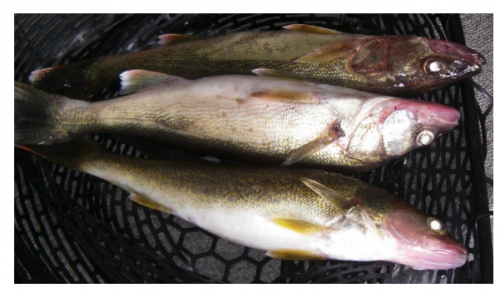