Finally got together with Daryk Campbell Sr to make good on a promise that I had made a couple of years ago. We finally nailed down a suitable date, time, and location to meet. What I did not expect was the drama at the Breaktime. Before Livie and I arrived, there was an altercation between a man and woman that we caught the tail end of and it ultimately involved the police. I'm glad that we were not blocked by the police and we were able to leave the parking lot and get to fishing. The sky was overcast, it was supposed to be in the mid 40’s. With the wind it never felt like it got above 38 deg.

Both Daryk and Livie got to try out their waders for the first time. Livie was actually wearing a pair of waders that My Betterhalf picked up at an estate sale on Friday. I had mentioned to Daryk that with the drought from last year and the cold winter that I was not sure what we would find. I still felt that we would get into some darters and minnows, but maybe not many bass or sunfish. As I suspected the water was running low and very clear. The clarity of the water took Daryk by surprise since he is used to fishing around St Louis and not having much more than a couple of inches or less than a foot of visibility.

As we were making a few casts, Livie started hand-fishing by catching a tadpole. After she released the tadpole, a small fish caught our eyes and after several attempts at catching two different ones Olivia hand-caught this slender madtom. 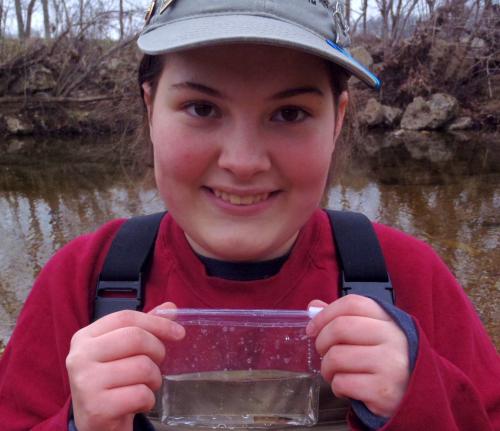 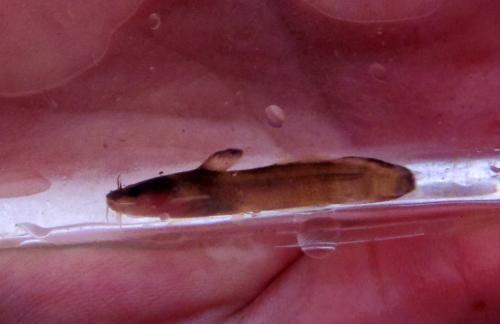 Since we really weren’t seeing many intermediate sized fish, I got the micro-rod with a #26 tanago half-moon hook and a couple of split shot rigged up with a tiny piece of red worm that I trimmed so that the hook point was exposed. That bait may last us all day. In the first section of the creek we did not see many fish, when we did it was important to get Daryk used to seeing the small fish, especially the darters. It didn’t take long until we found a darter that we might be able to get a bait in front of and actually catch it. I was able to get it to bite and Daryk was able to see the bait and the fish turn and take the bait before I set the hook. In the meantime Livie was fishing a white/chartreuse 1/64 oz plastic jig under a float and casting into the deeper water under the bridge. She found and caught several creek chubs. 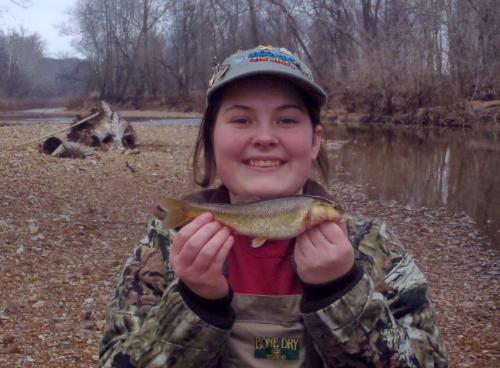 I showed Daryk what characteristics to look for on the creek chub, like the dark stripe, large terminal mouth, and especially the dark spot on the front of the dorsal fin. As Livie released her fifth chub, I had her had me the rod so it wouldn’t get in her way. I really just did that just to get the hot bait. I made a cast of two and landed a chub soon after. I then handed the rod to Daryk and he got his first creek chub and the first fish of the day. 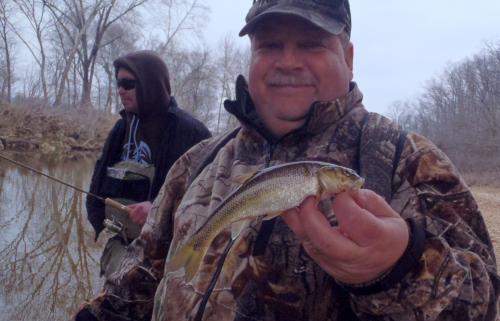 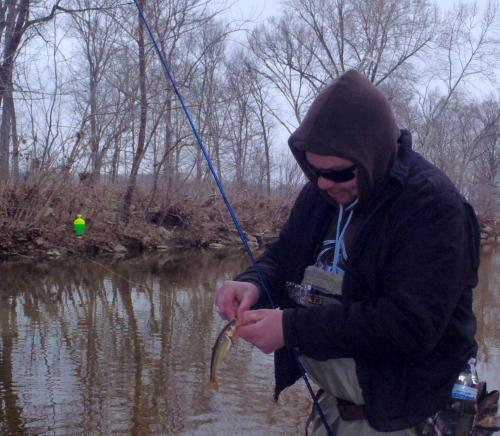 He and I went back to darter fishing and Livie back with the hot bait caught a bluegill sunfish (though it looks like there might be a little green sunfish in its genetics). 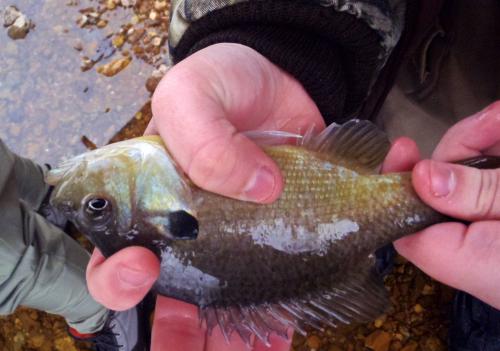 There was a lot of smack talk going around, but I finally landed another darter. Then Daryk followed up and caught two right in a row. 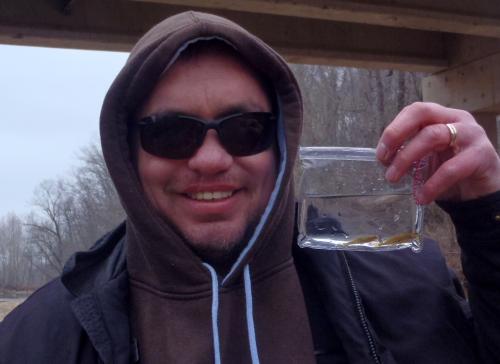 I initially thought they might be juvenile or female rainbow darters since those are really common in this creek. Looking at the edited photos, I noticed that the dorsal fin on those that Daryk and I caught had very few spines and were much shorter than the second dorsal fin. I now suspect that these were actually fantail darters and will have to get confirmation before I put it down as a new life-list species for me. A couple of these darters looked to be infested with flukes like some of the sunfish and bass. 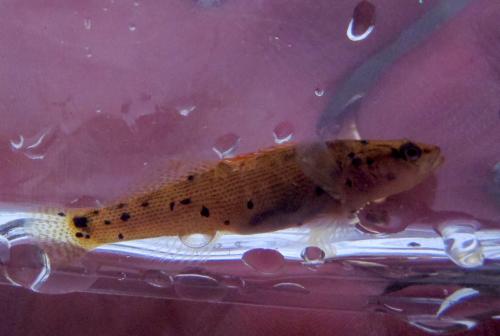 We headed upstream to another deeper pool (only about 2 to 2 ½ feet deep) and started getting into bigger schools of minnows that I had expected to find earlier. Livie caught a bluegill on her first cast, then got hung up in a shrub on the far bank. I went across to get it out and passed through a school of hundreds of minnows, mostly bleeding shiners. Daryk and Livie waded across when Daryk spotted some turtles on the bottom. If JestersHK reads this he will recall that it doesn’t take long for Olivia to get after a turtle or two once they have been spotted. 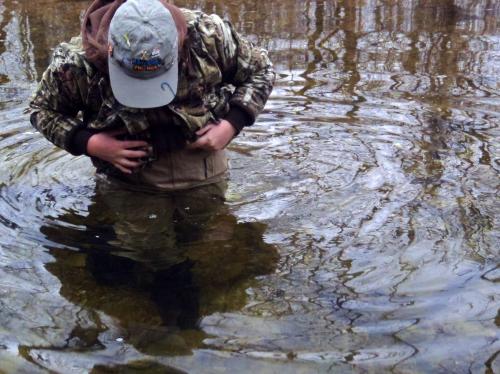 She didn’t get one of the bigger ones because the water was too deep, but she did manage to push a smaller one into more shallow water and did catch it. We both think that it is likely a small river cooter. 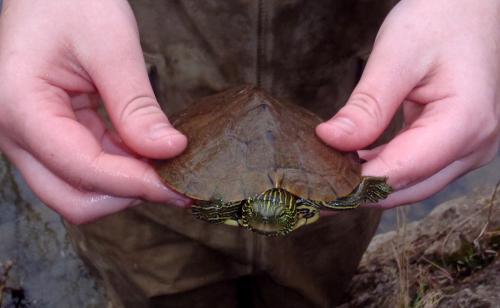 Since we had a better angle on the fish in front of us, I switched out the larger plastic jig and tied on a 1/125 oz white head and light pink chenile grub body. Daryk caught his first hornyhead chub. There was no spot on the dorsal fin and an orange spot behind the eye. The bleeding shiners kept going after the grub and Livie caught one. 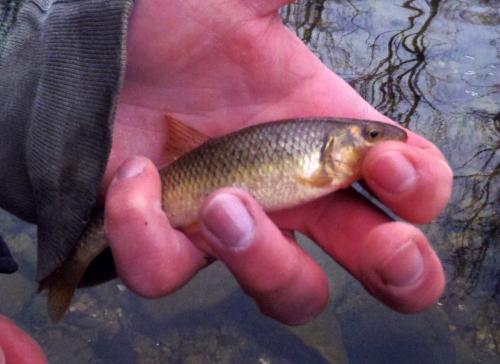 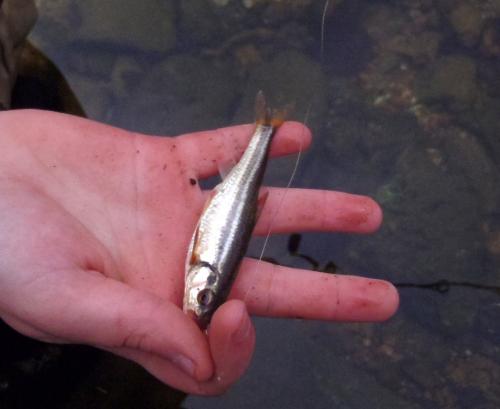 I switched the bait again to a #16 ribbed hares ear nymph and both Daryk and I caught bleeding shiners as well. Livie was hungry and we went back to the cars for lunch. After eating Daryk and I went back out and further upstream. I wanted to get into a few more darters. I know that there are rainbow darters, orangethroat darters, and my target species of the day, the greenside darter in this creek. In a small shallow off shoot, I spotted a male orangethroat darter we had spooked and had to tell Daryk where to put the bait until he finally saw the fish. This guy was tightlipped and would not bite no matter how Daryk got the bait positioned. Finally, we went to look for some others. Back in the main flow of the creek I spotted a male rainbow darter. Again, Daryk positioned the bait a couple of different ways to this fish. Eventually the fish turned and struck the bait and Dayrk caught his first supermale rainbow darter. 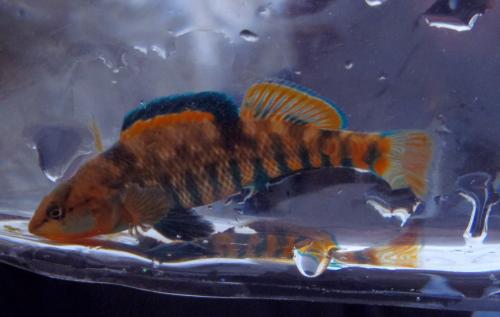 It was the possibility of catching a fish like this one that led him to contact me in the first place. I know that he now has the equipment and the confidence to now go out and catch darters like these wherever he can find them. I look forward to seeing his photos in the future. 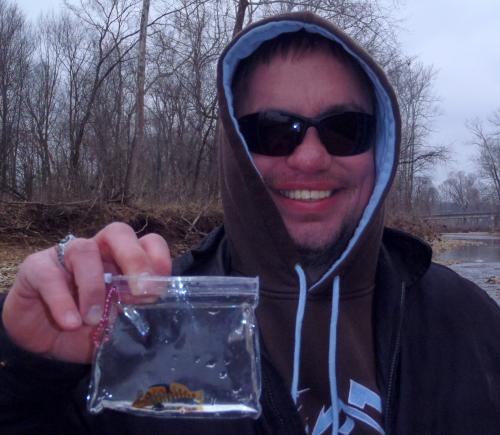