I haven't been out for a while. but got out about 7 a.m. this morning hoping for the top water bite I had been experiencing in North Indian around my dock - nothing.  I tried my long gravel points on the White that generally treat me fairly this time of year using drop shot at about 30 fow- nothing noted on the locator.  Tried a few more of my favorite spots (different type of ground) and again nothing.  About 8:30 a.m. I was thinking about heading home as I promised the wife I would be back by 9:30 to do something we had agreed on.

I recalled reading Bill B. post earlier this morning so decided to try a few bluff ends suspended fish over trees.  1st one nothing, 2nd one nothing, 3rd one bingo.  Lost count but at times was boating one after another but generally no longer than 5 minutes between bites.  I believe I caught over 20, lost several on the way up.  Mostly LM, mostly just barely 15 inches, a couple a little bigger.  Never left that spot until 10:30 a.m. after calling the wife and getting a reprieve. All in 80 fow suspended at 30 ft.  over trees at a bluff end.  They were still biting when I left.

One thing I noted, the fish that hit came from above my hook - the ones that came from below, came up, looked and left.  As a novice I thought it generally worked the other way.

Thanks Bill B. and others that post on this forum for the information you provide as I need all the help I can get. 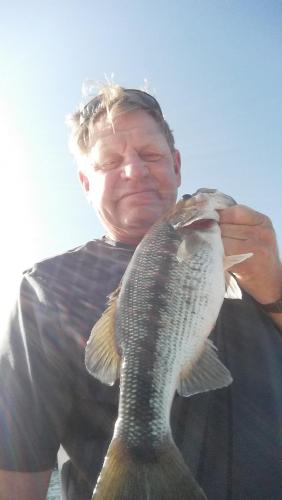